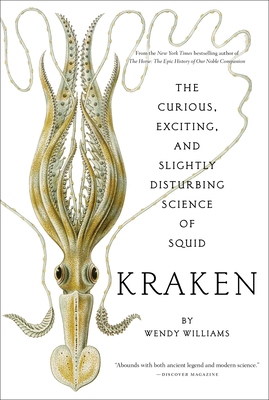 The ocean is the last remaining source of profound mystery and discovery on Earth with eighty percent of it still largely unexplored; thus, it is of perennial fascination. In Kraken: The Curious, Exciting, and Slightly Disturbing Science of Squid, journalist Wendy Williams introduces one of the ocean’s most charismatic, monstrous, enigmatic, and curious inhabitants: the squid. More than just calamari, squid species are fascinatingly odd creatures, with much to teach us about our own species, not to mention the obsessive interest so many of us can't help but have for the enormous beast that is the giant squid, which is quick to attack sperm whales, and even submarines and boats. Williams also examines other equally enthralling cephalopods, including the octopus and the cuttlefish, and explores their otherworldly abilities, such as camouflage and bioluminescence. Kraken takes the reader on a wild ride through the world of squid science and adventure, along the way answering some riddles about how the human brain works, what intelligence really is, and what monsters lie in the deep. Wendy Williams weaves a rich narrative tapestry around her subject, drawing powerfully on the passions and discoveries of scientists, fisherman, and squid enthusiasts around the world.

Wendy Williams's writing has appeared on the front pages of the Boston Globe, the Christian Science Monitor, and The Baltimore Sun. She's also written for the New York Times, Parade Magazine, the Wall Street Journal, and Science. Williams is the coauthor of Cape Wind, which was named one of 2007's ten best environmental books by Booklist and one of the year's best science books by Library Journal. She lives on Cape Cod, Massachusetts.