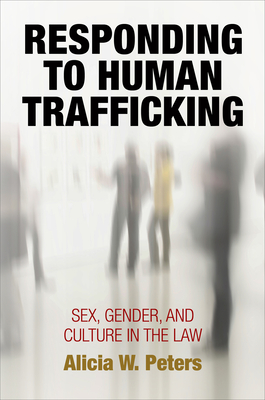 Signed into law in 2000, the Trafficking Victims Protection Act (TVPA) defined the crime of human trafficking and brought attention to an issue previously unknown to most Americans. But while human trafficking is widely considered a serious and despicable crime, there has been far less consensus as to how to approach the problem--owing in part to a pervasive emphasis on forced prostitution that overshadows repugnant practices in other labor sectors affecting vulnerable populations. Responding to Human Trafficking examines the ways in which cultural perceptions of sexual exploitation and victimhood inform the drafting, interpretation, and implementation of U.S. antitrafficking law, as well as the law's effects on trafficking victims.

Drawing from interviews with social workers and case managers, attorneys, investigators, and government administrators as well as trafficked persons, Alicia W. Peters explores how cultural and symbolic frameworks regarding sex, gender, and victimization were incorporated into the drafting of the TVPA and have been replicated through the interpretation and implementation of the law. Tracing the path of the TVPA over the course of nearly a decade, Responding to Human Trafficking reveals the profound gaps in understanding that pervade implementation as service providers and criminal justice authorities strive to collaborate and perform their duties. Ultimately, this sensitive ethnography sheds light on the complex and wide-ranging effects of the TVPA on the victims it was designed to protect.

Alicia W. Peters is Associate Professor of Anthropology and affiliated faculty in the Women's and Gender Studies Program at the University of New England.