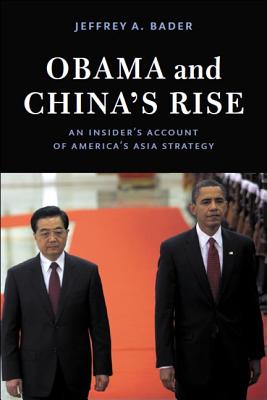 "Future presidents will need to find the right balance in China policy, so as to maintain America's strength and watchfulness but not fall into the classic security dilemma, wherein each side believes that growing capabilities reflect hostile intent and responds by producing that reality. I believe that President Obama struck that balance." --From Obama and China's Rise

In 2005, veteran diplomat and Asia analyst Jeffrey Bader met for the first time with the then-junior U.S. senator from Illinois. When Barack Obama entered the White House a few years later, Bader was named the senior director for East Asian affairs on the National Security Council, becoming one of a handful of advisers responsible for formulating and implementing the administration's policy regarding that key region. For obvious reasons--a booming economy, expanding military power, and increasing influence over the region--the looming impact of a rising China dominated their efforts.

Obama's original intent was to extend U.S. influence and presence in East Asia, which he felt had been neglected by a Bush administration fixated on the Middle East, particularly Iraq, and the war on terror. China's rise, particularly its military buildup, was heightening anxiety among its neighbors, including key U.S. allies Japan and South Korea. Bader explains the administration's efforts to develop stable relations with China while improving relationships with key partners worried about Beijing's new assertiveness.

In "Obama and China's Rise," Bader reveals what he did, discusses what he saw, and interprets what it meant--first during the Obama campaign, and then for the administration. The result is an illuminating backstage view of the formulation and execution of American foreign policy as well as a candid assessment of both. Bader combines insightful and authoritative foreign policy analysis with a revealing and humanizing narrative of his own personal journey.

Jeffrey A. Bader is the John C. Whitehead Senior Fellow for International Diplomacy with the John L. Thornton China Center at the Brookings Institution. He returned to Brookings after serving in the Obama administration from January 2009 to April 2011 as senior director for East Asian affairs on the National Security Council. Prior to joining the Obama team, he was a senior fellow in Foreign Policy at Brookings, where he also served as the first director of the Thornton Center.