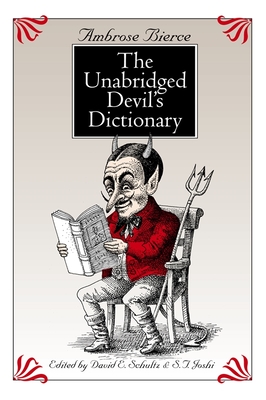 If we could only put aside our civil pose and say what we really thought, the world would be a lot like the one alluded to in The Unabridged Devil's Dictionary. There, a bore is "a person who talks when you wish him to listen," and happiness is "an agreeable sensation arising from contemplating the misery of another." This is the most comprehensive, authoritative edition ever of Ambrose Bierce's satiric masterpiece. It renders obsolete all other versions that have appeared in the book's ninety-year history.

A virtual onslaught of acerbic, confrontational wordplay, The Unabridged Devil's Dictionary offers some 1,600 wickedly clever definitions to the vocabulary of everyday life. Little is sacred and few are safe, for Bierce targets just about any pursuit, from matrimony to immortality, that allows our willful failings and excesses to shine forth. This new edition is based on David E. Schultz and S. T. Joshi's exhaustive investigation into the book's writing and publishing history. All of Bierce's known satiric definitions are here, including previously uncollected, unpublished, and alternative entries. Definitions dropped from previous editions have been restored while nearly two hundred wrongly attributed to Bierce have been excised. For dedicated Bierce readers, an introduction and notes are also included. Ambrose Bierce's Devil's Dictionary is a classic that stands alongside the best work of satirists such as Twain, Mencken, and Thurber. This unabridged edition will be celebrated by humor fans and word lovers everywhere.

Ambrose Bierce (Author) AMBROSE BIERCE (1842-1914?) was one of nineteenth-century America's most renowned satirists. The author of short stories, essays, fables, poems, and sketches, he was a popular columnist and wrote for several San Francisco and London newspapers during his forty-year journalism career. David E. Schultz (Editor) DAVID E. SCHULTZ is a technical editor. He is coeditor, with S. T. Joshi, of both A Sole Survivor, a collection of Ambrose Bierce's autobiographical writings, and Lord of a Visible World, an autobiography-in-letters of H. P. Lovecraft. S. T. Joshi (Editor) S. T. JOSHI is a freelance writer and editor. He is the editor of The Collected Fables of Ambrose Bierce and author of H. P. Lovecraft: A Life.

"Bierce was America's first realist writer, but, unlike realism's later practitioners, he knew something about reality—it's really funny."--P.J. O'Rourke

"This carefully edited manuscript will add immeasurably to Bierce studies."--Joseph B. McCullough, University of Nevada-Las Vegas

"This is a work of genuinely impressive scholarship and will undoubtedly become the authoritative text for Bierce’s Devil’s Dictionary."--Thomas V. Quirk, University of Missouri-Columbia

"Most readers and biographers have agreed with Schultz and Joshi that The Devil's Dictionary is 'quintessential Bierce.' For the serious student of Bierce's diabolical lexicon, their beautiful new edition . . . will be a delight."--Sewanee Review

A compilation of all of Bierce's satirical definitions published over a forty-year period, this latest version of the Dictionary ('A malevolent literary device for cramping the growth of a language and making it hard and inelastic') merits a wide readership both within and without the Academy ('A modern school where football is taught').”--American Literary Review