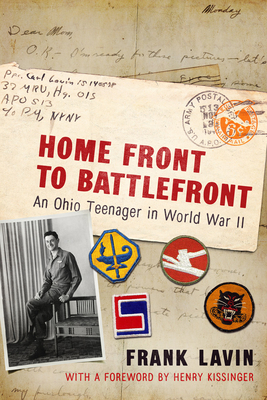 Carl Lavin was a high school senior when Pearl Harbor was attacked. The Canton, Ohio, native was eighteen when he enlisted, a decision that would take him with the US Army from training across the United States and Britain to combat with the 84th Infantry Division in the Battle of the Bulge. Home Front to Battlefront is the tale of a foot soldier who finds himself thrust into a world where he and his unit grapple with the horrors of combat, the idiocies of bureaucracy, and the oddities of life back home—all in the same day. The book is based on Carl’s personal letters, his recollections and those of the people he served beside, official military history, private papers, and more.

Home Front to Battlefront contributes the rich details of one soldier’s experience to the broader literature on World War II. Lavin’s adventures, in turn disarming and sobering, will appeal to general readers, veterans, educators, and students of the war. As a history, the book offers insight into the wartime career of a Jewish Ohioan in the military, from enlistment to training through overseas deployment. As a biography, it reflects the emotions and the role of the individual in a total war effort that is all too often thought of as a machine war in which human soldiers were merely interchangeable cogs.

Frank Lavin is the son of Carl Lavin. Frank has served as a US ambassador, White House aide, banker, and trade negotiator. He currently works in business in Singapore.

“If you like American history, or military history, or just a good narrative yarn, do check out Home Front to Battlefront.”—Bill Kristol, editor, Weekly Standard

“These singular letters and the keen curation of them are well worth anyone’s reading.”—Ohio Today

“A must-read for everyone exploring the wartime experiences of soldiers on the western front.”—Lisa Beckenbaugh, H-War, H-Net Reviews

“We sometimes forget that the US Army was, and is, essentially a force of teenagers … who are required to grapple with the exigencies of combat even as they are attempting to grapple with adulthood.”—From the foreword by Henry Kissinger

“Carl Lavin’s combined letters and memoir are an invaluable contribution to the literature on the American G.I.’s experiences in World War II.”—Peter S. Kindsvatter, author of American Soldiers: Ground Combat in the World Wars, Korea, and Vietnam