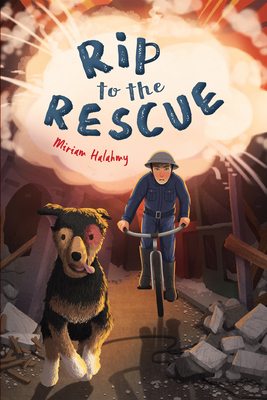 It's 1940 and Nazi bombs are raining down on London, but 13-year-old bike messenger Jack has just discovered something unbelievable: a stray dog with a surprising talent.

Jack navigates the smoky, ash-covered streets of London amid air raid sirens and falling bombs, dodging shrapnel and listening for cries for help, as a bike messenger for fire crews. When Jack finds a dog, miraculously still alive after the latest Nazi bombing of London, he realizes there's something extra special about the shaggy pup--he can smell people who are trapped under debris.

With his new canine companion, nicknamed Rip because of the dog's torn ear, maybe Jack can do more than just relay messages back-and-forth--he can actually save lives. And if Jack's friend Paula is right about the impending Nazi invasion, he and Rip will need to do all they can to help Jewish families like hers.

There's just one problem: Jack has to convince his ill-tempered father to let him keep Rip.

Based on true episodes during the London Blitz in World War II, this action-packed and touching story explores the beginnings of search-and-rescue dogs and the bravery and resourcefulness of young people determined to do their part for their country.

Miriam Halahmy is a poet, special needs educator, and novelist. She has worked with refugees in schools as well as in workshops she led for PEN and the Medical Foundation for the Victims of Torture. Her books include Behind Closed Doors and Hidden, which was nominated for the Carnegie Medal.

"Jack's fictional role as Blitz messenger boy and Rip’s owner creates the framework for a nail-biting adventure, but this is also a tale of friendship and family, in which no one is completely whole. . . . will surely appeal to young readers."—The New York Times

"Jack’s transformation—from a boy who was bullied in school for his one deaf ear to a brave one with a ragtag and loyal group of friends—stands out, as does his relationship with the dog, who also hears in only one ear. Based on the adventures of an actual canine, this British import is a taut and affecting historical novel of friendship and courage." —Publishers Weekly

"This fast-paced historic adventure juxtaposes schoolyard scuffles, scrapes, and black eyes against the horrors of the nightly bombings of England. Characters are fully developed yet evolve quickly and realistically, as is often the case for children growing up in a traumatically war-torn country. Several characters, including Rip the dog, are based on actual wartime heroes. This title is a fine addition to the abundant genre of WWII children's literature." —School Library Connection