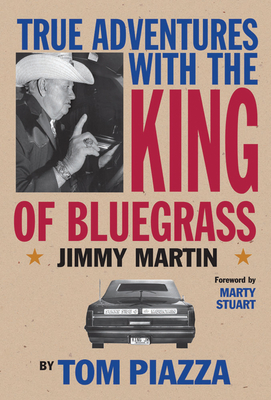 Jimmy Martin was just twenty-two years old when Bill Monroe asked him to join the Blue Grass Boys. That invitation was the start of a career that spanned half a century and culminated with Martin's induction into the International Bluegrass Music Association's Hall of Honor. Always an enigmatic figure, Martin was as famous for his temper as he was for his talent.

On assignment from the Oxford American magazine, fiction writer and music critic Tom Piazza drove from his home in New Orleans to Nashville to interview Martin and found himself pitched headlong into a world he couldn't have anticipated. Martin's mercurial personality drew the writer into a series of escalating encounters (with mean dogs, broken-down cars, and near electrocution), culminating in a harrowing and unforgettable expedition, with Martin, to the Grand Ole Opry.

Though, or perhaps because, visits to the Opry like the one Piazza recounts were common for Martin, and though he frequently played on its stage and always hoped to become a member, he died before seeing his dream fulfilled. True Adventures with the King of Bluegrass is the funny, scary, and powerfully poignant portrait of one of the legends of American music.