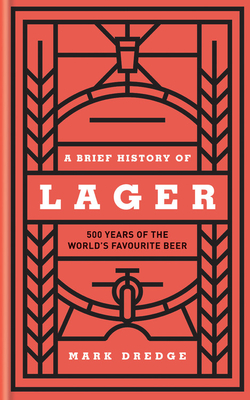 
Beer has been brewed and drunk for 10,000 years, but those earliest beers (think dark, soupy and sour) would've been unrecognizable to modern lager drinkers expecting something bright, effervescent and golden. Despite beer's history, which is as old as civilization, lager is a relative newcomer, ostensibly first brewed around 500 years ago, while those pale, lively lagers that we know so well today didn't arrive until the middle of the 19th century and weren't widespread until over a hundred years later.
In this fascinating book, beer expert Mark Dredge dives into the history of this well-loved drink. Discover: what, exactly, a lager is; how it was first brewed and how it would have tasted; what beer was like before the birth of lager; and what role was played by German monks and kings in the creation of the drink we know so well today. From the importance of 500-year-old purity laws to a scrupulously researched exploration of modern beer gardens, Mark has delved deep into the story of the world's favorite beer.
From 16th Century Bavaria to the recent popularity of specialist craft lagers, A Brief History of Lager is an engaging and informative exploration of a classic drink.

Mark Dredge is a writer and beer expert. He has written five books, including his bestselling Craft Beer World, Beer and Food and The Beer Bucket List, and numerous articles on the topic, while also appearing on Channel 4's Sunday Brunch to share his knowledge. He has won many awards for his work, including the British Guild of Beer Writers' Beer and Food Writer of the Year Award in 2016, 2014, 2013 and 2011.