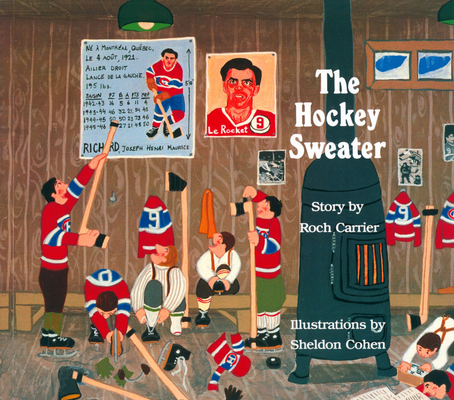 In the days of Roch’s childhood, winters in the village of Ste. Justine were long. Life centered around school, church, and the hockey rink, and every boy’s hero was Montreal Canadiens hockey legend Maurice Richard. Everyone wore Richard’s number 9. They laced their skates like Richard. They even wore their hair like Richard. When Roch outgrows his cherished Canadiens sweater, his mother writes away for a new one. Much to Roch’s horror, he is sent the blue and white sweater of the rival Toronto Maple Leafs, dreaded and hated foes to his beloved team. How can Roch face the other kids at the rink?

Roch Carrier is Canada’s National Librarian and the beloved author of many Canadian classics for both adults and children. In 1968 he published his hugely successful novel, La Guerre, Yes Sir!. He has written many novels, short stories, plays, film and television scripts, essays, travel books, and poetry. Several of his works have become classics and are used in schools and universities around the world. His much-loved children's story, The Hockey Sweater, remains a timeless favorite. In 1991, Roch Carrier was awarded the Stephen Leacock Award for Humour for Prayers of a Very Wise Child. Among his many other awards and honors, Mr. Carrier is a Fellow of the Royal Society of Canada, an Officer of the Order of Canada, and the holder of many honorary doctorates. All this from the boy who grew up in a village with no library and no books. Now the village has a brand new library – the Roch Carrier Library.

PRAISE FOR The Hockey Sweater:

"It's a classic. . . . You can't really be a Canadian and not read it. It's become part of our cultural lexicon." --Canadian Children's Book News

". . . not only sweet and funny, but a wise parable about Quebec and English Canada." --Toronto Star

". . . Roch Carrier's timeless book about a boy's catalogue snafu resonated across this hockey-mad country--because who didn't understand the horror of receiving the enemy's hockey sweater in the mail?" --Faceoff.com

“[A] true-life parable woven so deeply into the national fabric that it’s hard to conceive of a time when it wasn’t there.” --Toronto Sun