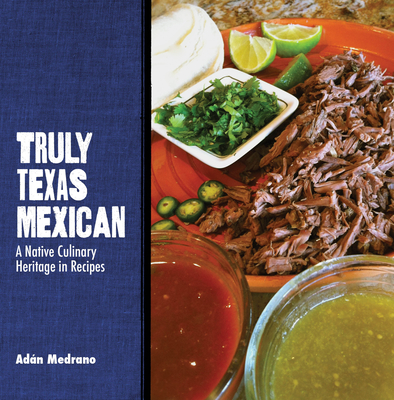 Over thousands of years, Native Americans in what is now Texas passed down their ways of roasting, boiling, steaming, salting, drying, grinding, and blending. From one generation to another, these ancestors of Texas’s Mexican American community lent their culinary skills to combining native and foreign ingredients into the flavor profile of indigenous Texas Mexican cooking today.
Building on what he learned from his own family, Adán Medrano captures this distinctive flavor profile in 100 kitchen-tested recipes, each with step-by-step instructions. Equally as careful with history, he details how hundreds of indigenous tribes in Texas gathered and hunted food, planted gardens, and cooked.
Offering new culinary perspective on well-known dishes such as enchiladas and tamales, Medrano explains the complexities of aromatic chiles and how to develop flavor through technique as much as ingredients. Sharing freely the secrets of lesser-known culinary delights, such as turcos, a sweet pork pastry served as dessert, and posole, giant white corn treated with calcium hydroxide, he illuminates the mouth-watering interconnectedness of culture and cuisine.
The recipes and personal anecdotes shared in Truly Texas Mexican illuminate the role that cuisine plays in identity and community.

Chef and food writer Adán Medrano holds a Certificate in Culinary Arts from the Culinary Institute of America. Now living in Houston, he grew up in San Antonio, Texas, and in northern Mexico, where he developed his expertise in the flavor profile and techniques of indigenous Texas Mexican food.

Adán Medrano speaks from his roots and shares his passion for food, providing an insightful perspective on an often mischaracterized Texas Mexican cuisine.
--Alain Dubernard CMB, The Culinary Institute of America, San Antonio

Tex-Mex has had its story told in the works of writers such as Robb Walsh. Now it is time for the Texas Mexicans to have their foods and their heritage acknowledged, which is what Medrano’s book provides.
--John Griffin, SavorSA

In the deepest part of our soul we are celebrating food and hospitality. These recipes share not only where our culinary traditions come from, but the resiliency of our ancestors and the healing power of food.
--Johnny Hernandez, chef/owner of La Gloria Street Foods of Mexico, The Frutería-Botanero, and El Machito

Illustrated with full-color, full-page photography of its sumptuous dishes on virtually every other page, Truly Texas Mexican: A Native Culinary Heritage in Recipes is a wonderful treasury of 100 kitchen-tested recipes showcasing the heritage of Texas Mexican cuisine. From tasty Beef Tamales to Potato and Egg Tacos, Crab and Avocado Cocktail, Hibiscus Drink and much more, Truly Texas Mexican features flavors to remember. A superb addition to cookbook shelves!
--Midwest Book Review

Adán Medrano is putting the spotlight on a style of food that often has been overlooked. Once you explore this remarkable branch of Texas Mexican cuisine you will discover a richness that will be cherished for generations to come.
--Diana Barrios Trevino, owner of Los Barrios Enterprises

Within the last ten years, people have started recognizing the cuisine (Tex-Mex) as an original American regional food. While this has been a worthy change, people have not really traced the roots of the cuisine, particularly to the distinctive indigenous groups of the region, which is what Adán does.”
--Jeffrey Pilcher, University of Toronto Scarborough