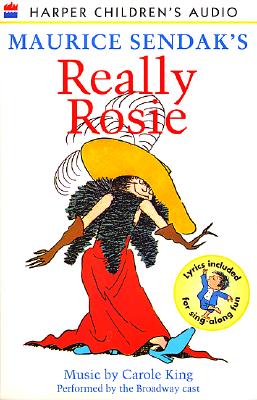 By Maurice Sendak
$14.95
Email or call for price

(BOOK COPY)‘This sturdily bound paperback contains the script of the TV special Really Rosie, the text of [the four Nutshell Library volumes], and music arranged for easy piano and guitar chords for the seven Carole King songs from [the program]. A delight for TV fans of all ages.’ —Language Arts.
(AUDIO COPY)This great big deal of of a Broadway musical extravaganza for children was proclaimed by critic John Simon as "an oasis in the desert of today's theatre."

Maurice Sendak’s children’s books have sold over 30 million copies and have been translated into more than 40 languages. He received the 1964 Caldecott Medal for Where the Wild Things Are and is the creator of such classics as In the Night Kitchen, Outside Over There, Higglety Pigglety Pop!, and Nutshell Library. In 1970 he received the international Hans Christian Andersen Medal for Illustration, in 1983 he received the Laura Ingalls Wilder Award from the American Library Association, and in 1996 he received a National Medal of Arts in recognition of his contribution to the arts in America. In 2003, Sendak received the first Astrid Lindgren Memorial Award, an annual international prize for children’s literature established by the Swedish government.