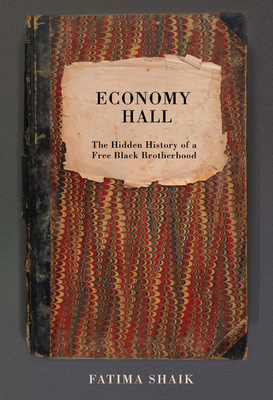 By Fatima Shaik, The Historic New Orleans Collection (Prepared by)
$34.95

It is impossible to imagine New Orleans, and by extension American history, without the vibrant and singular Creole culture. In the face of an oppressive white society, members of the Soci t d'Economie et d'Assistance Mutuelle built a community and held it together through the era of slavery, the Civil War, Reconstruction, and Jim Crow terrorism. Economy Hall: The Hidden History of a Free Black Brotherhood follows Ludger Boguille, his family, and friends through landmark events--from the Haitian Revolution to the birth of jazz--that shaped New Orleans and the United States.

The story begins with the author's father rescuing a century's worth of handwritten journals, in French, from a trash hauler's pickup truck. From the journals' pages emerged one of the most important multiethnic, intellectual communities in the US South: educators, world-traveling merchants, soldiers, tradesmen, and poets. Although Louisiana law classified them as men of color, Negroes, and Blacks, the Economie brothers rejected racism and colorism to fight for suffrage and education rights for all.

A descendant of the Economie's community, author Fatima Shaik has constructed a meticulously detailed nonfiction narrative that reads like an epic novel.

Fatima Shaik, a former professor and journalist, is a trustee of PEN America and author of six previous short story collections and young adult novels. Economy Hall is her first nonfiction work.