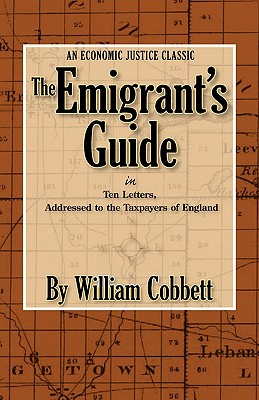 William Cobbett, considered by G. K. Chesterton as the "Apostle of Distributism," wrote THE EMIGRANT'S GUIDE in 1829 toward the end of a long and fruitful career as a journalist, traveler, economic commentator, and political activist. Frustrated with trying to change the system in England, Cobbett broke his rule against advising English men and women to stay in their own country, and urged them to go to the United States, where instead of working for others and being effective slaves of the English government and upper classes, they could obtain some small ownership of land or other capital and become independent -- owners instead of being owned themselves. THE EMIGRANT'S GUIDE includes the texts of letters written home to England by people considered useless in England, providing a valuable source of sociological and economic data of early 19th century America, as well as giving us an understanding why the United States was considered the "Land of Opportunity" for so long. As one recent immigrant expressed his enthusiasm for his new country, in which he had easily become a landowner, "America forever for me " THE EMIGRANT'S GUIDE provides an incentive to modern politicians and policymakers to restore the greatness that was once America's, and begin to spread true economic democracy throughout the globe.