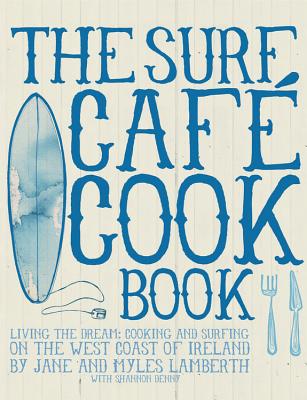 By Myles Lamberth, Jane Lamberth
Email or call for price
Out of Print

The Surf Café Cookbook is the first book by Jane and Myles Lamberth, proprietors of Shells Café in Strandhill on the west coast of Ireland. Jane and Myles met eight years ago when they were both working in the UK. They spent summers working in restaurants by the sea in Cornwall so they could go surfing, and winters running chalets in ski resorts in the Alps. Eventually they felt the need to put some roots down so they took the plunge and opened their own place, Shells Café, in March 2010. And they haven't looked back since. It’s the perfect place for Jane and Myles to create great food and live the outdoor lifestyle they love. They use fresh organic seasonal produce – vegetables from the bountiful Irish soil, and fish from the wild Atlantic. From foraging on the beach to creating the perfect picnic to making homemade Baileys, The Surf Café Cookbook focuses on locally-produced food that’s unpretentious and tasty. It’s food for sharing with friends and family, around the kitchen table or on a beach blanket thrown on the sand. It’s contemporary Irish cooking with a soupçon of salty air. And the Surf Café Cookbook is more than just a cookbook, it also includes all sorts of useful tips ranging from how to gut a fish to making crafty home accessories for special occasions. This is coastal living at it’s best – cooking, eating and living the Irish way. In this book Myles and Jane want to share their food adventures with you.

Myles Lamberth is head chef at Shells Cafe in Strandhill, Ireland. He's the co-author (with wife Jane) of the highly successful Surf Cafe Cookbook.Food and the outdoors are Jane and Myles Lamberth's great passions. Myles learnt his cookery skills in some unique locations around the world: he's cooked on campfires in Africa while river guiding, been a chef at exclusive chalets in the French Alps, and working for a top on-site catering company in the US where he cooked for musicians like The Gypsy Kings and Snoop Dogg. Closer to home, he spent several seasons working as a chef in prestigious beach hotels like the 5-star Headland Hotel in Cornwall. Jane, meanwhile, began her career in marketing but her love of travel soon took her away from the city to destinations that offered surf or snow. The couple met in Cornwall and spent the next five years working and travelling together, doing seasonal work in the UK and France. In 2010 they opened Shells Cafe at Strandhill on the beautiful Atlantic coast of northwest Ireland. Shells quickly developed a name as a flourishing eatery serving delicious wholesome foods, and Jane and Myles went on to write a book about their experiences, filled with fabulous recipes. The Surf Cafe Cookbook (also published by Orca Publications) has since been a runaway success, receiving glowing reviews from cookery mags and blogs around the world.