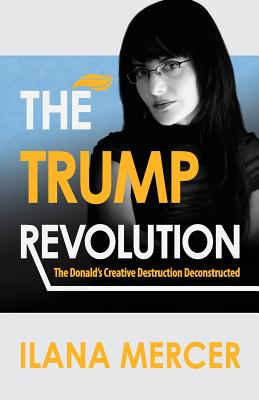 Donald J. Trump is smashing an enmeshed political spoils system to bits: the media complex, the political and party complex, the conservative poseur complex. You name it; Trump is tossing and goring it. The well-oiled elements that sustain and make the American political system cohere are suddenly in Brownian motion, oscillating like never before. An entrenched punditocracy, a self-anointed, meritless intelligentsia, oleaginous politicians, slick media, big money: These political players have built the den of iniquity that Trump is destroying. Against these forces is Trump, acting as a political Samson that threatens to bring the den of iniquity crashing down on its patrons. It is this achievement that the author of "The Trump Revolution: The Donald's Creative Destruction Deconstructed" cheers. By drastically diminishing The Machine's moving parts, the author hopes Trump might just help loosen the chains that bind the individual to central government, national and transnational. In the age of unconstitutional government-Democratic and Republican-this Trumpian process of creative destruction can only increase the freedom quotient. We inhabit what broadcaster Mark Levin has termed a post-constitutional America, explains ILANA Mercer. The libertarian ideal-where the chains that tether us to an increasingly tyrannical national government are loosened and power is devolved once again to the smaller units of society-is a long way away. In this post-constitutional jungle, the law of the jungle prevails. In this legislative jungle, the options are few: Do Americans get a benevolent authoritarian to undo the legacies of Barack Obama, George W. Bush and those who went before? Or, does the ill-defined entity called The People continue to submit to Demopublican diktats, past and present? The author of "The Trump Revolution" contends that in the age of unconstitutional government, the best liberty lovers can look to is "action and counteraction, force and counterforce in the service of liberty." Until such time when the individual is king again, and a decentralized constitution that guarantees regional and individual autonomy has been restored-the process of creative destruction begun by Mr. Trump is likely the best Americans can hope for. A close reading of "The Trump Revolution" will reveal that matters of process are being underscored. Thus the endorsement over the pages of "The Trump Revolution" is not necessarily for the policies of Trump, but for The Process of Trump, the outcome of which might see a single individual weaken the chains that bind each one of us to an oppressive, centralized authority and to the system that serves and sustains it. "The Trump Revolution: The Donald's Creative Destruction Deconstructed" takes the reader through Trump's political progression in real time, when many of the book's essays were penned. The author galvanizes concepts in American political theory-such as John C. Calhoun's idea of a concurrent majority and historian David Hackett Fischer's notion of the omnibus candidate-to bolster her case that the Trump revolution is the last heave-ho of America's historic, founding majority and those who identify with it and value its legacy.

ILANA MERCER is the author of "The Trump Revolution: The Donald's Creative Destruction Deconstructed" (June, 2016) and the pathbreaking "Into The Cannibal's Pot: Lessons For America From Post-Apartheid South Africa" (2011). She has been writing a popular, weekly, paleolibertarian column-begun in Canada-since 1999. Ilana's online homes are www.ilanamercer.com, www.barelyablog.com & https: //twitter.com/IlanaMercer