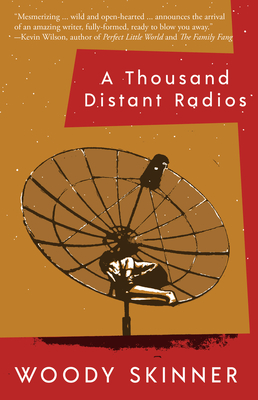 Painting modern America in saturated colors, this collection of short stories explores the passions and compulsions at the core of our national identity: those qualities that propel us forward or hold us back; that make us strangers to ourselves and others even while we pine for connection; the ways we cope with the inescapable enormity of our nation's geography. A marlin swims circles in a luminous backyard pool; a small-town surgeon broods from the Olympus of his hilltop house, watched all the while by his neighbors below; a knife salesman plies blades of mythic sharpness while crisscrossing a crazed North American landscape like a mad Paul Bunyan; a young man in rural Arkansas nestles into a satellite dish; and a grandfather’s body lies in state amid Annie Oakley’s last buffalo kill, General Patton’s Persian rug, and countless other oddments of a legendary America. Phenomenally imaginative, skewed, and hyperbolical, these stories are honed to cut through the blur of our times.

Woody Skinner is a Sherwood Anderson Fiction Award winner whose work has appeared in Another Chicago Magazine, Booth, The Carolina Quarterly, and Mid-American Review. He lives in Cincinnati, Ohio.

"Woody Skinner possesses such a mesmerizing gift with language that it's hard not to invoke writers like Barry Hannah and Joy Williams . . . A Thousand Distant Radios announces the arrival of an amazing writer, fully-formed, ready to blow you away."  —Kevin Wilson, author, The Family Fang

"Woody Skinner's stories are sly, tragic, violent, beautiful. This is a powerful and disturbing collection, the most gripping work I've read in some time."  —Elizabeth McKenzie, author, The Portable Veblen

"A Thousand Distant Radios is an extravagantly weird book. Woody Skinner is a singular talent, and I'm glad to have found his stories."  —Kyle Minor, author, Praying Drunk

"I love Woody Skinner's deft, ironic writing; he's like a literary country doctor, giving you the bad news so gently you barely notice how much it hurts. Inventive, emotional, and shruggingly comic, these stories give us a 21st-century American South populated by characters - a plumber, a knife salesman, a reluctant catfish farmer - who regret their mistakes while they wait in vain for their real lives to start: people, that is, like you and me."  —J. Robert Lennon, author, Familiar

"Skinner's work is reminiscent of other great voice-driven comic writers of the American South: Barry Hannah, Donald Barthelme, Padgett Powell. Like these writers, Skinner, winner of [the] Sherwood Anderson Fiction Prize, is funny, sure, but also capable of affecting pathos within the strangest of premises . . . wildly inventive and darkly comic, but always moving."  —Memorious Magazine

"Woody Skinner's characters manage to be both wonderfully absurd and absurdly normal. They remind us of our common humanity even as we watch them navigate their impossible, sad and surprising lives. A Thousand Distant Radios is a beautifully strange collection of stories." —Margaret Malone, author, People Like You and PEN/Hemingway Award Finalist

"These aren’t voyeuristic peeks into messed up lives. Skinner’s empathy is palpable . . . . With humor and satire, [he] thumbs his nose at the chaotic existence with which we’re all familiar . . . .We can’t win, but we won’t lose, either, with Skinner to tell the tale." —Mari Carlson, fictionwritersreview.com