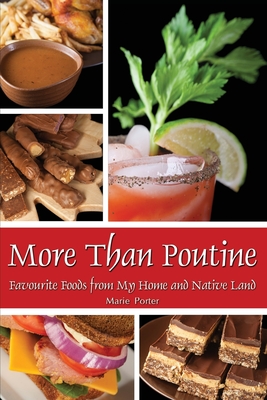 By Marie Porter, Michael Porter (Photographer)
$37.49
Not in stock. Usually arrives in 2-5 Days
(This book cannot be returned.)

Mike Myers has been quoted as saying "There is no one more Canadian than a Canadian who no longer lives in Canada."

In Marie Porter's experience - 10 years of living away - that quote is not only true in the general sense, it's especially true when is comes to Canadian foods.

Canadian expats may be divided by politics, geography, or even regional culture ... But post a photo of a hideous "poutine" you found in an American restaurant to a Canadian Expat group, and you will find 100% agreement that it's an abomination. Post about buttertarts, or peameal bacon, and you're guaranteed a long, wistful discussion about the many foods we miss from the motherland. Canadian food is the great equalizer, a very popular topic of discussion, and a bonding experience.

Marie Porter's "More Than Poutine" is a unique cookbook: Canadian food, presented from the view and experience of a Canadian living away.

Developed as a 150th birthday present and love letter to her homeland and its people, "More Than Poutine" explores the
many ways that the land, people, and cultural mosaic have influenced Canadian food. It covers all of the national and regional favourites - both traditional and modern - while also providing recipes for accurate homemade versions of many sauces, snacks, treats, and other convenience foods unique to our country.

The foods craved by those living away are now much more accessible, wherever they may be living This is a book for you.

For those who not only crave our tourti re and buttertarts, but would give anything to do shots of Chalet Sauce again.

For those who die a little inside when we see what is sold as "Canadian Bacon" - anemic little rounds of ham, not the robust deliciousness of the back bacon we once knew.

For those who have given up on ordering "poutine" abroad, knowing full well that there's a chance that whatever ends up being presented will end up with a fried egg - or some other nonsense - on top.

For those who have caved to craving and paid $4+ for a Wunderbar, shipped from Amazon.

For those who have tried to explain to friends that Sweet and Sour sauce is NOT the same as what we were used to back home.

This is a book for all Canadians: Not only those who are living away and want a taste of home, but those living at home and wanting to learn more about Canadian food, and those wanting gluten-free alternatives to their favourite traditional and retail Canadian food items. It's also for those who aren't Canadian, but are looking to expand their culinary horizons, and those who love a Canadian expat and want to surprise them with food

The recipes are easy to make, with simple, straightforward instructions. Measurements are provided in both US and metric units. This cookbook includes more than 120 recipes, and features gorgeous full colour photography for each recipe. Most of the 120+ recipes in this book are inherently gluten-free, and gluten-free variations are provided for most of those that are not.