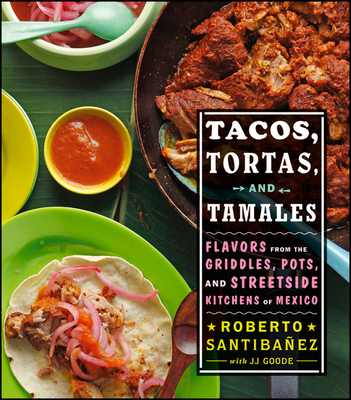 Discover the flavors of Mexican street food in your own kitchen

Americans are having a love affair with the taco. What began as affection for the fast-food version—that hard yellow shell filled with ground beef and mysterious yellow cheese—has blossomed into an all-out obsession for the real thing, with upscale renditions and taco trucks popping up from coast to coast.

Now, with Tacos, Tortas, and Tamales, chef Roberto Santibañez shows you how to recreate the thrilling, authentic flavors of the taquerias of Mexico in your own home. In addition to tacos, the book also explores the equally exciting Mexican sandwiches called tortas and hearty tamales, as well as salsas, condiments, fresh juices, and even desserts and refreshing margaritas.

While the flavors you'll find here are exciting and complex, the cooking itself is anything but complicated. With Tacos, Tortas, and Tamales on your kitchen shelf, dinner will never be dull again.

ROBERTO SANTIBANEZ is a graduate of Le Cordon Bleu in Paris and the chef/owner of Fonda restaurant in Brooklyn and Manhattan, New York. A native of Mexico City, he is the President of Truly Mexican Consulting and a member of The Culinary Institute of America's Latin Cuisines Advisory Council. He is also the author of Rosa's New Mexican Table and Truly Mexican. His website is www.robertosantibanez.com.

JJ GOODE has written about food and travel for the New York Times, Gourmet, Saveur, Bon Appetit, Food &Wine, and Every Day with Rachael Ray. He is the coauthor of six cookbooks, including A Girl and Her Pig by April Bloomfield and Morimoto: The New Art of Japanese Cooking by Masaharu Morimoto.

TODD COLEMAN is the executive food editor of Saveur magazine and a photographer who props, styles, and shoots the majority of the magazine''s covers and many stories, both in the studio and on location. A graduate of the CIA, he has worked in restaurants, been a private chef, produced shows for the Food Network, and photographed cookbooks like The Japanese Grill by Tadashi Ono and The Mom 100 Cookbook by Katie Workman. He lives in Brooklyn and is a fiend for Mexican food.