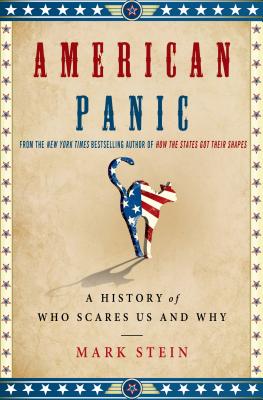 By Mark Stein
Email or call for price
Out of Print

Virtually every American, on one level or another, falls victim to the hype, intensity, and propaganda that accompanies political panic, regardless of their own personal affiliations. By highlighting the similarities between American political panics from the Salem witch hunt to present-day vehemence over issues such as Latino immigration, gay marriage, and the construction of mosques, Stein closely examines just what it is that causes us as a nation to overreact in the face of widespread and potentially profound change.

This book also devotes chapters to African Americans, Native Americans, Catholics, Mormons, Jews, Chinese and Japanese peoples, Communists, Capitalists, women, and a highly turbulent but largely forgotten panic over Freemasons. Striking similarities in these diverse episodes are revealed in primary documents Stein has unearthed, in which statements from the past could easily be mistaken for statements today. As these similarities come to light, Stein reveals why some people become panicked over particular issues when others do not.

“If there is an American cultural DNA - Mark Stein is the guy who most ably picks apart the strands that tell us who we are -- and in this case, what scares us and why -- and puts them and ultimately us under a microscope for a rarefied, compelling, and unforgettable view.” —Brian Unger, Writer, TV Host, Actor

“How refreshing! Mark Stein does not look at our history through the familiar prism of presidents, battles, and laws; instead he uncovers and relates the behavior and fears of the populace that too often has set the course of history. A wonderful read filled with lessons so needed now.” —Stanley Kutler, Author The Wars of Watergate

“American Panic is a learned romp through American history, and the persistent bad habit a strong and free people has of worrying about other people. Mark Stein's careful research demonstrates how successive panics, over witches, Indians, Masons, Chinese, Socialists, Latinos, Muslims and more, share a kind of DNA of hysteria. Stein's work is a sobering reminder of who we were and who we are. American Panic is edifying, entertaining and important.” —Ray Suarez, Al Jazeera America, and author of Latino Americans: The 500 -ear Legacy That Shaped a Nation

“Through compelling narrative and intriguing research, Mark Stein shines a beacon into the midnight of the American soul and shows us what our deepest fears say about ourselves as individuals and as a people. The psychological gap between the ideal and reality of E Pluribus Unum is Stein's theme, and he limns it with original and fascinating insight.” —Mark Olshaker, coauthor of Law & Disorder, Mindhunter, and The Cases That Haunt Us; novelist and documentary filmmaker