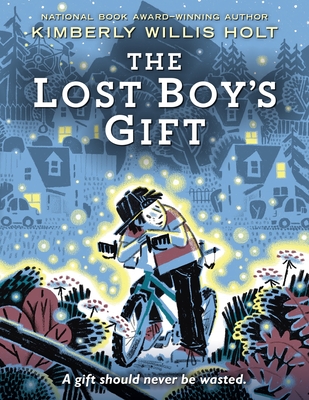 Kimberly Willis Holt explores themes of divorce, acceptance, intergenerational friendship, and the power that comes with noticing in The Lost Boy's Gift, an insightful middle-grade novel.

Nine-year-old Daniel must move across the county with his mom after his parents’ divorce. He’s leaving behind his whole life—everything—and he’s taking a suitcase of anger with him. But Daniel is in for a surprise when he settles into While-a-Way Lane and meets his new neighbors—the Lemonade Girl, the hopscotching mailman, the tiny creatures, and especially Tilda Butter. Tilda knows how to look and listen closely, and it's that gift that helps Daniel find his way in that curious placed called While-a-Way Lane.

"The dull and seemingly ordinary neighborhood in which Daniel fetches up with his newly divorced mom turns out to be anything but. Daniel's first impressions of While-a-Way Lane aren't good . . . Wondrous things that happen. . . After Daniel's experiences, readers will want to move there too."—Kirkus, starred review

"Fans of Natalie Babbitt and Anne Ursu will appreciate the blend of emotional resonance and magic."—The Horn Book

"Holt’s whimsical narrative moves between Daniel’s struggles in his new life, Tilda’s reflections on her old one, and the critters and community that surround them both. . . A smart, hopeful perspective of life on any lane."—The Bulletin