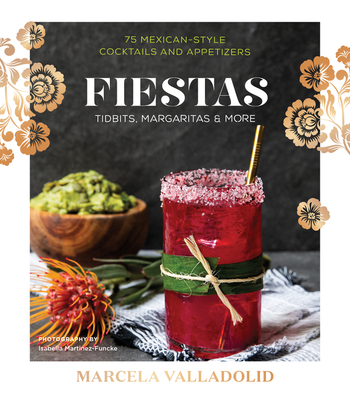 By Marcela Valladolid
$19.99
Not in stock. Usually arrives in 2-5 Days

Marcela Valladolid loves to entertain guests at her beautiful home in San Diego, and just as she did in Casa Marcela, this book captures the spirit of her hybrid Mexican-American upbringing in vibrant and mouthwatering recipes. Picadillo Lettuce Cups are topped with avocado and lime and make for perfect finger food; Spicy Chimichurri and Jalapeño-Cilantro Aioli are the perfect addition to a crudite platter; the classic panzanella salad is updated with tomatillos, panela cheese, and pork rinds; and vegetarian options include Chickpea Ceviche Tostadas and Sweet Potato Chipotle Hummus.

Of course there are plenty of cocktails, too—Strawberry Basil Cardamom Margaritas, a Mexican-inspired Old-fashioned, Orange Cinnamon Sour, and the Kalimotxo, a red wine and Mexican Coke sangria.

MARCELA VALLADOLID grew up in Tijuana and jumped straight into a culinary life with her first job working at her aunt’s cooking school in Baja, Mexico. She soon realized she wanted to pursue her growing love for food full time. After cooking school, Marcela eventually parlayed her classical training and skills to become a food editor at Bon Appétit magazine. Next she crossed into TV when she landed her own cooking show on Discovery en Español called Relatos con Sabor and was selected as one of the contenders on The Apprentice: Martha Stewart. In 2009, Marcela was given the chance to showcase her family recipes when she released her first cookbook titled Fresh Mexico: 100 Simple Recipes for True Mexican Flavor. Soon after her book release, she landed a dream job as the host of her own Food Network show, Mexican Made Easy, which aired for five seasons. Marcela released a second cookbook called Mexican Made Easy in 2011, a companion to her Food Network show and an entryway into authentic Mexican cuisine. She she was a long-time co-host of The Kitchen, the Emmy-nominated talk show on The Food Network and is currently a permanent judge on Best Baker in America, also on Food Network. Her latest book is Casa Marcela, released in 2017. She lives in San Diego, California.