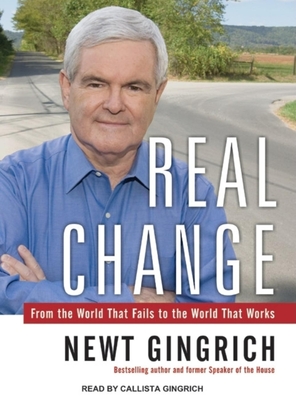 By Newt Gingrich, Callista Gingrich (Narrated by)
Email or call for price
Out of Print

Are you fed up with bickering politicians, self-satisfied bureaucrats, and a government that never seems to address the real problems facing our country? Can we create a government that is small, efficient, and responsive-from the state house to the White House? Is that kind of real change even possible? Newt Gingrich, architect of the Contract with America, says it is time for citizens to demand results from our elected officials. In this revealing and exciting new book, he shows how America can achieve transformational change-from a government of bureaucratic failure to a government that can meet the challenges of the twenty-first century. As a first step, Gingrich busts the pernicious myth that America is divided between conservative red states and liberal blue states. As Gingrich points out, the American people are united on almost every important issue facing our country-including immigration, taxes, defending America, and freedom of religion. The real division is between red-white-and-blue America and a fringe on the Left. Red-white-and-blue America believes overwhelmingly-by majorities of 70 percent or more-that we need a change in course. But our politicians aren't listening. Gingrich reveals why the Democratic Party can't deliver real change and why the Republican Party won't. He provides answers and a step-by-step, issue-by-issue toolkit for building a better America-the safe, innovative, and dynamic America we all want.

Newt Gingrich was a member of the U.S. House of Representatives from 1979 to 1999, serving four years as Speaker of the House starting in 1995. A 2012 presidential candidate, he was named "Time" magazine's 1995 Man of the Year.

Callista Gingrich is president of the Gingrich Foundation, a charitable nonprofit corporation, and the voice for the audiobook "Rediscovering God in America."