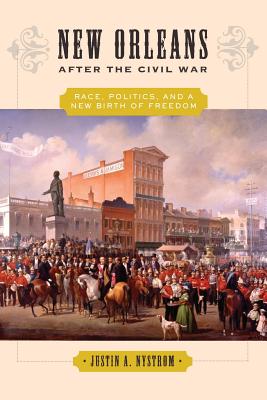 We often think of Reconstruction as an unfinished revolution. Justin A. Nystrom's original study of the aftermath of emancipation in New Orleans takes a different perspective, arguing that the politics of the era were less of a binary struggle over political supremacy and morality than they were about a quest for stability in a world rendered uncertain and unfamiliar by the collapse of slavery.

Commercially vibrant and racially unique before the Civil War, New Orleans after secession and following Appomattox provides an especially interesting case study in political and social adjustment. Taking a generational view and using longitudinal studies of some of the major political players of the era, New Orleans after the Civil War asks fundamentally new questions about life in the post-Civil War South: Who would emerge as leaders in the prostrate but economically ambitious city? How would whites who differed over secession come together over postwar policy? Where would the mixed-race middle class and newly freed slaves fit in the new order? Nystrom follows not only the period's broad contours and occasional bloody conflicts but also the coalition building and the often surprising liaisons that formed to address these and related issues. His unusual approach breaks free from the worn stereotypes of Reconstruction to explore the uncertainty, self-doubt, and moral complexity that haunted Southerners after the war.

This probing look at a generation of New Orleanians and how they redefined a society shattered by the Civil War engages historical actors on their own terms and makes real the human dimension of life during this difficult period in American history.

Justin A. Nystrom is an assistant professor of history at Loyola University New Orleans and the co-director of the Center for the Study of New Orleans.