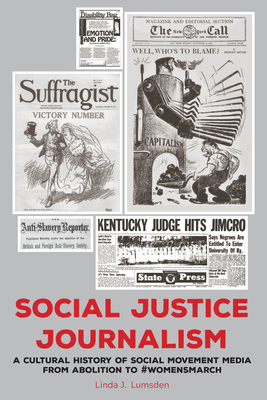 Social Justice Journalism: A Cultural History of Social Movement Media from Abolition to #womensmarch argues that to better understand the evolution, impact, and future of digital social justice media we need to understand their connections to a venerable print culture of dissent. This cultural history seeks to deepen and contextualize knowledge about digital activist journalism by training the lens of social movement theory back on the nearly forgotten role of eight twentieth-century American social justice journals in effecting significant social change. The book deliberately conflates "social movement media" with newer and broader conceptions of "social justice journalism" to highlight changing definitions of journalism in the digital era. It uses framing theory, social movement theory, and theories about the power of facts and emotion in storytelling to show how social movement media practice journalism to mobilize collective action for their cause. After tracing the evolution and functions of each social justice movement's print culture, each chapter concludes with a comparison to its online counterparts to illuminate links with digital media. The book concludes that digital activist journalism, while in some ways unique, also shares continuities and commonalities with its print predecessors.

Linda J. Lumsden teaches journalism history at The University of Arizona. She is the author of Black, White, and Red All Over: A Cultural History of the Radical Press in Its Heyday, 1900-1917 (2014); INEZ: The Life and Times of Inez Milholland (2004); and Rampant Women: Suffragists and the Right of Assembly (1996). A 2012-2013 Fulbright Scholar in Malaysia, she holds a Ph.D. in mass communication from The University of North Carolina at Chapel Hill.