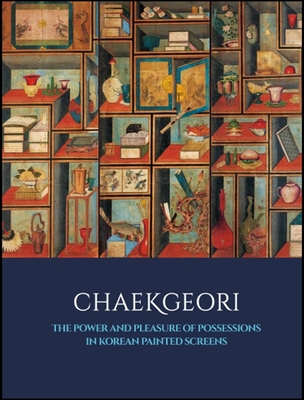 Chaekgeori explores the genre of Korean still-life painting known as chaekgeori (loosely translated as books and things). Encouraged and popularized by King Jeongjo (1752-1800, r. 1776-1800) as a political tool to promote societal conservatism against an influx of ideas from abroad, chaekgeori was one of the most enduring and prolific art forms of Korea's Joseon dynasty (1392-1910). It depicts books and other material commodities as symbolic embodiments of knowledge, power, and social reform.

Chaekgeori has maintained its popularity in Korea for more than two centuries, and remains a force in Korean art to this day. No other genre or medium in the entirety of Korean art, including both court and folk paintings, has so engaged and documented the image of books and collectable commodities and their place in an ever-evolving Korean society. When it transitioned into folk-style painting, unexpected and creative visual elements emerged. Folk versions of chaekgeori from the eighteenth and nineteenth centuries often show an exquisite fusion of Korean and Western composition that feels modern to our contemporary eyes. Not only books but many other commodities are depicted to represent the commoner's desire for higher social status, wealth, and knowledge.

The first large-scale traveling exhibition of its kind to be published, The Power and Pleasure of Possessions in Korean Painted Screens is being presented at the Charles B. Wang Center, Stony Brook University (September 29, 2016-December 23, 2016), at the Spencer Museum of Art, University of Kansas (April 15, 2017-June 11, 2017), and at the Cleveland Museum of Art (August 5, 2017-November 5, 2017). This exhibition is made possible by generous grants from the Korea Foundation and the Gallery Hyundai.

Byungmo Chung is Professor in the Department of Cultural Assets at Gyeongju University, Korea. He was a visiting scholar in the Department of Asian Cultures and Languages at Rutgers University and President of the Korean Folk Painting Society. His scholarship focuses on the genre paintings and Minhwa--the folk painting of Korea. He has organized several Minhwa exhibitions in Korea and written numerous articles and books about Korean folk and genre paintings, including Chaesaekhwa, Polychrome Paintings of Korea. Sunglim Kim is Assistant Professor of Korean Art History in the Department of Art History and the Asian and Middle Eastern Studies Program, Dartmouth College. Her scholarship focuses on premodern and early twentieth-century Korean art and culture, including the rise of consumer culture and the role of professional nouveau riche in late Joseon Korea, Japanese colonial photographs of Korea, and Korean women artists. She has curated several exhibitions in the United States and written numerous publications on Korean art.