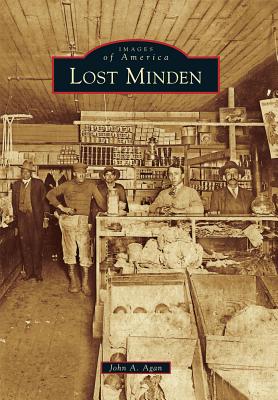 Minden has transformed quite a bit since Charles Vedeer founded it in 1835. The town has suffered damages of the Civil War and Reconstruction and between 1872 and 1933 the devastation of five fires and a killer tornado. Despite disaster, Minden continues to progress, but adaptation and rebuilding have caused many familiar landmarks to vanish from the local landscape. The 1902 fire led to the enactment of a city ordinance banning wooden structures downtown; as a result, many edifices were reconstructed. Today, not a single building in the business district predates the 1870s, and the roles of those still standing--such as the First National Bank, which is expected to reopen as a restaurant--are continually changing. In 1918, another fire destroyed the Minden Lumber Mill, the town's largest industry. Later in the 20th century, the development of a city government complex demolished an entire shopping district, the 1905 Webster Parish Courthouse, and Minden City Hall. Lost Minden captures catastrophes, celebrations, storefronts, and back streets that otherwise only remain in memories.
?John Agan is a lifelong Minden resident who has been actively involved in local history writing and research for more than 30 years. In the course of these activities, he accumulated most of the vintage photographs in this volume that depict the Minden that has since been "lost.