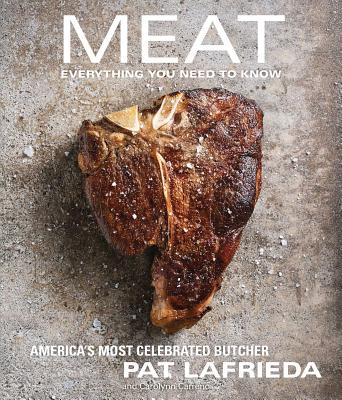 Pat LaFrieda, the third generation butcher and owner of America’s premier meatpacking business, presents the ultimate book of everything meat, with more than seventy-five mouthwatering recipes for beef, pork, lamb, veal, and poultry.

For true meat lovers, a beautifully prepared cut of beef, pork, lamb, veal, or poultry is not just the center of the meal, it is the reason for eating. No one understands meat’s seductive hold on our palates better than America’s premier butcher, Pat LaFrieda. In Meat: Everything You Need to Know, he passionately explains the best and most flavorful cuts to purchase (some of them surprisingly inexpensive or unknown) and shares delicious recipes and meticulous techniques, all with the knowledge that comes from a fourth generation butcher. If you have ever wondered what makes the meat in America’s finest restaurants so delectable, LaFrieda—the butcher to the country’s greatest chefs—has the answers, and the philosophy behind it.

Step-by-step photographs make tricky operations like butterflying a veal chop or tying a crown roast easy even for beginners; beautiful double-page photographic diagrams show more clearly than any previous book where different cuts come from on the animal; and advice on necessary equipment, butcher’s notes, and glorious full-color photographs of the dishes complete this magnificent and comprehensive feast for the senses.

Throughout the pages of Meat, Pat LaFrieda’s interwoven tales of life in the meatpacking business and heartwarming personal reminiscences celebrate his family’s century of devotion to their calling and are a tribute to a veritable New York City institution. Pat’s reverence and passion for his subject both teach and inspire.

Pat LaFrieda’s first introduction to the meat world was in the summer of 1981, when he was just ten years old and learning the tricks of the trade at his father’s butchering business. Thirty years later, Pat, his father, and cousin own and operate New York City’s most prestigious and valued meatpacking facility. Pat LaFrieda Meat Purveyors supplies the finest restaurants in New York City, Philadelphia, DC, Las Vegas, Miami, Chicago, and more. They also operate four retail locations at Citi Field—home to the New York Mets—including two Pat LaFrieda Original Steak Sandwich stands, a LaFrieda Meatball Slider stand, and the sit-down restaurant, Pat LaFrieda Chop House. In 2014 they became the "Official Burger of the Mets." Pat has appeared on countless national TV shows including Today, The Chew, Rachael Ray Show, CNN, Anthony Bourdain: No Reservations, and Martha Stewart. More information can be found at www.lafrieda.com.

Carolynn Carreño is a James Beard Award–winning writer for magazines including Bon Appétit, Saveur, the Los Angeles Times, Gourmet, and Food & Wine, and coauthor of books with chefs Nancy Silverton, Kenny Shopsin, and Sara Foster. Her cookbooks are known for their distinct voice and storytelling style.

"A valuable reference that will give readers a greater appreciation for not only their favorite cuts of meat, but their butcher as well.”
— Publishers Weekly

“Pat LaFrieda does everything right as a butcher. MEAT stands out to me as the best handbook there is on this subject.”
— Mario Batali

“It made me laugh, it made me smile, it made me miss my grandpa. I absolutely adore this book.”
— Rachael Ray

“If you want to know about meat, this is the book. The recipes are great and each one has a story to tell.”
— Andrew Carmellini

“The recipes and techniques in this book are things that can be used in any kitchen whether it’s at home or in the restaurant.”
— Marc Forgione

“A celebration of Pat’s enormous skill set, his encyclopedic understanding of meats and their various cuts and how to best use them. Butcher extraordinaire!"
— Chef Alex Guarnaschelli

“A must-have for any home cook, it will surely be a valuable resource for years to come.”
— Chef Daniel Humm

“MEAT is a superb, detailed sourcebook that I am thrilled to have on my shelf.”
— Chef Geoffrey Zakarian

“A fantastic resource for both the professional chef and the home cook.”
— Chef Missy Robbins

“I loved absolutely everything about this book.”
— SanFranciscoBookReview.com

“Meat is unsurpassed and truly sets the standard for a book that offers both recipes and education.”
— Cooking by the Book