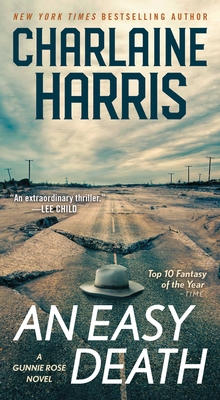 By Charlaine Harris
$9.99
Email or call for price

This is book number 1 in the Gunnie Rose series.

“A gripping, twisty-turny, thrill ride of a read.” —Karin Slaughter, New York Times bestselling author of Pieces of Her

“When a master of her craft offers to tell you a story, let her. The results are dazzling.” —Seanan McGuire, New York Times bestselling author of the Alex, Hugo, Nebula, and Locus Award–winning Wayward Children series.

Set in a fractured United States, in the southwestern country now known as Texoma. A world where magic is acknowledged but mistrusted, especially by a young gunslinger named Lizbeth Rose. Battered by a run across the border to Mexico Lizbeth Rose takes a job offer from a pair of Russian wizards to be their local guide and gunnie. For the wizards, Gunnie Rose has already acquired a fearsome reputation and they’re at a desperate crossroad, even if they won’t admit it. They’re searching through the small border towns near Mexico, trying to locate a low-level magic practitioner, Oleg Karkarov. The wizards believe Oleg is a direct descendant of Grigori Rasputin, and that Oleg’s blood can save the young tsar’s life.

As the trio journey through an altered America, shattered into several countries by the assassination of Franklin Roosevelt and the Great Depression, they’re set on by enemies. It’s clear that a powerful force does not want them to succeed in their mission. Lizbeth Rose is a gunnie who has never failed a client, but her oath will test all of her skills and resolve to get them all out alive.

Charlaine Harris is a New York Times bestselling author who has been writing for over thirty years. She was born and raised in the Mississippi River Delta area. She has written four series, and two stand-alone novels, in addition to numerous short stories, novellas, and graphic novels (cowritten with Christopher Golden). Her Sookie Stackhouse books have appeared in twenty-five different languages and on many bestseller lists. They’re also the basis of the HBO series True Blood. Harris now lives in Texas, and when she is not writing her own books, she reads omnivorously. Her house is full of rescue dogs.

“A gripping, twisty-turny, thrill-ride of a read."
— -- Karin Slaughter,

"When a master of her craft offers to tell you a story, let her. The results are dazzling."
— – Seanan McGuire,

“A gritty, action-filled story, An Easy Death is an alternate history Western with a touch of magic. Gunny Rose, the tough but sympathetic protagonist, gives us a clear-sighted look at her world as she works to complete her contract and keep her clients alive.”
— -- Anne Bishop,

"This looks like another winning series from a sure-bet author."
— -- Booklist