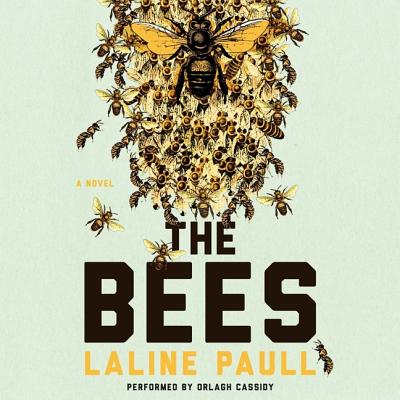 By Laline Paull, Orlagh Cassidy (Read by)
$46.79
Special Order. May not be available. Call the store for details.

“This book is completely amazing. Paull uses real bee behavior as the basis for a tale of complex hive society, complete with a religion, a caste system, and threats from the outside world. The heroine, Flora 717, is an abnormally large and intelligent bee. Her size and strength give her opportunities to work at a variety of jobs, and as she begins to uncover the dark secrets of the hive, Flora makes a decision that could change the future of her entire hive. Well-crafted and filled with intrigue and action, this is a brilliant, thought-provoking, and completely original debut that does for bees what Richard Adams did for rabbits in Watership Down.”
— Flannery Fitch, Bookshop Santa Cruz, Santa Cruz, CA

Flora 717 is a sanitation worker, a member of the lowest caste in her orchard hive, where work and sacrifice are the highest virtues and worship of the beloved Queen the only religion. But Flora is not like other bees. With circumstances threatening the hive's survival, her curiosity is regarded as a dangerous flaw, but her courage and strength are assets. She is allowed to feed the newborns in the royal nursery and then to become a forager, flying alone and free to collect nectar and pollen. A feat of bravery grants her access to the Queen's inner sanctum, where she discovers mysteries about the hive that are both profound and ominous.

But when Flora breaks the most sacred law of all-daring to challenge the Queen's preeminence-enemies abound, from the fearsome fertility police who enforce the hive's strict social hierarchy to the high priestesses jealously wedded to power. Her deepest instincts to serve and sacrifice are now overshadowed by a greater power: a fierce maternal love that will bring her into conflict with her conscience, her heart, and her society-and lead her to perform unthinkable deeds.

Thrilling, suspenseful, and spectacularly imaginative, The Bees and its dazzling young heroine will forever change the way you look at the world outside your window.