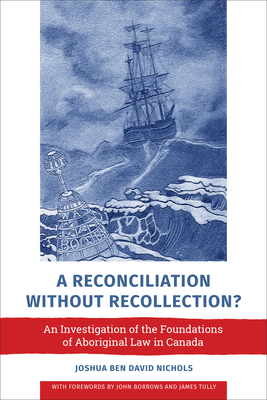 By Joshua Ben David Nichols, John Borrows (Foreword by), James Tully (Foreword by)
Email or call for price
Out of Print

The current framework for reconciliation between Indigenous peoples and the Canadian state is based on the Supreme Court of Canada's acceptance of the Crown's assertion of sovereignty, legislative power, and underlying title. The basis of this assertion is a long-standing interpretation of Section 91(24) of Canada's Constitution, which reads it as a plenary grant of power over Indigenous communities and their lands, leading the courts to simply bypass the question of the inherent right of self-government.

In A Reconciliation without Recollection?, Joshua Ben David Nichols argues that if we are to find a meaningful path toward reconciliation, we will need to address the history of sovereignty without assuming its foundations. Exposing the limitations of the current model, Nichols carefully examines the lines of descent and association that underlie the legal conceptualization of the Aboriginal right to govern.

Blending legal analysis with insights drawn from political theory and philosophy, A Reconciliation without Recollection? is an ambitious and timely intervention into one of the most pressing concerns in Canada.