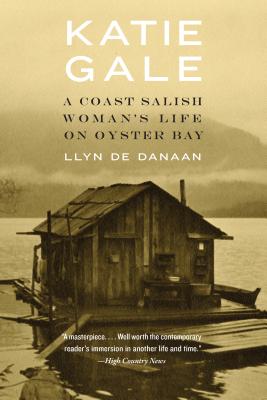 A gravestone, a mention in local archives, stories still handed down around Oyster Bay: the outline of a woman begins to emerge and with her the world she inhabited, so rich in tradition and shaken by violent change. Katie Kettle Gale was born into a Salish community in Puget Sound in the 1850s, just as settlers were migrating into what would become Washington State. With her people forced out of their traditional hunting and fishing grounds into ill-provisioned island camps and reservations, Katie Gale sought her fortune in Oyster Bay. In that early outpost of multiculturalism—where Native Americans and immigrants from the eastern United States, Europe, and Asia vied for economic, social, political, and legal power—a woman like Gale could make her way.
As LLyn De Danaan mines the historical record, we begin to see Gale, a strong-willed Native woman who cofounded a successful oyster business, then won the legal rights from her Euro-American husband, a man with whom she had raised children but who ultimately made her life unbearable. Steeped in sadness—with a lost home and a broken marriage, children dying in their teens, and tuberculosis claiming her at forty-three—Katie Gale’s story is also one of remarkable pluck, a tale of hard work and ingenuity, gritty initiative and bad luck that is, ultimately, essentially American.

LLyn De Danaan is a writer and an anthropologist. She contributed to the book Vashon Island Archaeology: A View from Burton Acres Shell Midden, and her articles have appeared in Women’s Studies Quarterly, Columbia: The Magazine of Northwest History, and Oregon Historical Quarterly.

"This volume is an act of resurrection, well worth the contemporary reader's immersion in another life and time."—Annie Dawid, High Country News

"De Danaan's deeply sympathetic and immersive approach to her subject restores a voice to one among countless people whose story has been silenced."—Shelf Talk

“Katie Gale’s story is unique in its scale; few accounts of the nineteenth-century Northwest focus on the life of a single Native woman and her family. LLyn De Danaan’s writing is big history made deeply human, offering insights not just into Native American history but also into the arrival of industrial capitalism on Puget Sound, the politics of statehood and race in Washington, and the profound transformation of local landscapes.”—Coll Thrush, author of Native Seattle: Histories from the Crossing-Over Place

“I have followed LLyn De Danaan’s writing path for years now. She is talented and bold, and this new book puts her firmly where she belongs—at the heart of the American voice. Good stuff, highly recommended.”—Luis Alberto Urrea, author of The Devil’s Highway and Into the Beautiful North