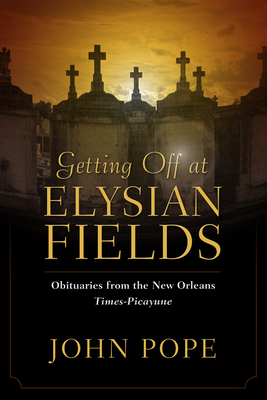 No city in America knows how to mark death with more funerary panache than New Orleans. The pageants commemorating departed citizens are often in themselves works of performance art. A grand obituary remains key to this Stygian passage. And no one writes them like New Orleanian John Pope. Collected here are not just simple, mindless recitations of schools and workplaces, marriages, and mourners bereft. These pieces in Getting Off at Elysian Fields are full-blooded life stories with accounts of great achievements, dubious dabblings, unavoidable foibles, relationships gone sour, and happenstances that turn out to be life-changing. To be sure, there are stories about Carnival monarchs, great philanthropists, and a few politicians. But because New Orleans embraces eccentric behavior, there are stories of people who colored way outside the lines. For instance, there was the doctor who used his plasma to make his flowers grow, and the philanthropist who took money she had put aside for a fur coat to underwrite the lawsuit that desegregated Tulane University. A letter carrier everyone loved turned out to have been a spy during World War II, and a fledgling lawyer changed his lifelong thoughts about race when he saw blind people going into a Christmas party through separate doors--one for white people and another for African Americans. Then there was the punctilious judge who got down on his hands and knees to edge his lawn--with scissors. Because New Orleans funerals are distinctive, the author includes accounts of four that he covered, complete with soulful singing and even some dancing. As a popular, local bumper sticker indisputably declares, "New Orleans--We Put the Fun in Funeral.

John Pope has written obituaries throughout his forty-four-year career in journalism and was a member of the New Orleans Times-Picayune team that won two Pulitzer Prizes, a National Headliner Award, and a George Polk Award for coverage of Hurricane Katrina and its aftermath.