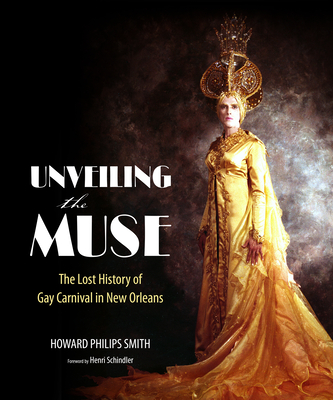 
Traditional Carnival has been well documented with a vast array of books published on the subject. However, few of them, if any, mention gay Carnival krewes or the role of gay Carnival within the larger context of the season. Howard Philips Smith corrects this oversight with a beautiful, vibrant, and exciting account of gay Carnival.
Gay krewes were first formed in the late 1950s, growing out of costume parties held by members of the gay community. Their tableau balls were often held in clandestine locations to avoid harassment. Even by the new millennium, gay Carnival remained a hidden and almost lost history. Much of the history and the krewes themselves were devastated by the AIDS crisis. Whether facing police raids in the 1960s or AIDS in the 1980s, the Carnival krewes always came back each season. A culmination of two decades of research, Unveiling the Muse positions this incredible story within its proper place as an amazing and important facet of traditional Carnival.
Based on years of detailed interviews, each of the major gay krewes is represented by an in-depth historical sketch, outlining the founders, moments of brilliance on stage, and a list of all the balls, themes, and royalty. Of critical importance to this history are the colorful ephemera associated with the gay tableau balls. Reproductions of never-before-published brilliantly designed invitations, large-scale commemorative posters, admit cards, and programs add dimension and life to this history. Sketches of elaborate stage sets and costumes as well as photographs of ball costumes and rare memorabilia further enhance descriptions of these tableau balls.