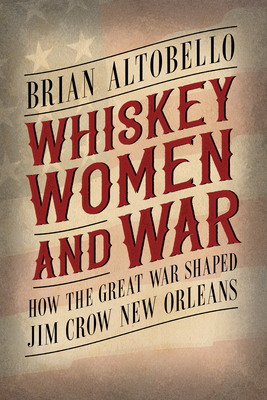 As the US entered World War I in 1917, a burst of patriotism in New Orleans collided with civil liberties. The city, due to its French heritage, shared a strong cultural tie to the Allies, and French speakers from Louisiana provided vital technical assistance to the US military during the war effort. Meanwhile, citizens of German heritage were harassed by unscrupulous, ill-trained volunteers of the American Protective League, ordained by the Justice Department to shield America from enemies within. As a major port, the wartime mobilization dramatically reshaped the cultural landscape of the city in ways that altered the national culture, especially as jazz musicians spread outward from the vice districts. Whiskey, Women, and War: How the Great War Shaped Jim Crow New Orleans surveys the various ways the city confronted the demands of World War I under the supervision of a dynamic political machine boss. Author Brian Altobello analyzes the mobilization of the local population in terms of enlistments and war bond sales and addresses the anti-vice crusade meant to safeguard the American war effort, giving attention to Prohibition and the closure of the red-light district known as Storyville. He studies the political fistfight over women's suffrage, as New Orleans's Gordon sisters demanded the vote predicated on the preservation of white supremacy. Finally, he examines race relations in the city, as African Americans were integrated into the city's war effort and cultural landscape even as Jim Crow was firmly established. Ultimately, the volume brings to life this history of a city that endured World War I in its own singular style.

Brian Altobello received his undergraduate and graduate degrees in US history from Louisiana State University. He is an educational consultant in New Orleans-area schools, lecturer on the American Queen Steamboat Cruise Line, and author of Into the Shadows Furious: The Brutal Battle for New Georgia.