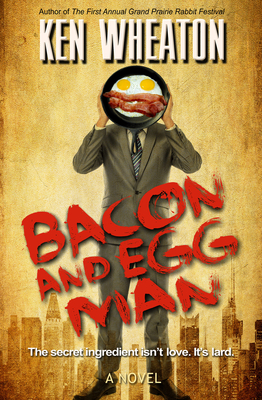 In the halls of Congress, on the streets, in the media, the war on fast food is on. Tofu may be topical, but bacon is eternal. Bacon and Egg Man, Ken Wheaton's second novel, is a sly send-up of a politically correct food establishment, where the Northeast has split off from the rest of the United States. The new Federation is ruled by the electoral descendants of King Mike, a man who made it his mission to form a country based on good, clean living. But you can't keep good food down. And Wes Montgomery, a journalist at the last print paper in the Federation, is a mild-mannered bacon-and-egg dealer on the side. Until he gets pinched and finds himself thrust into Chief Detective Blunt's wild-eyed plot to bring down the biggest illegal food supplier in the land. To make matters worse, Wes is partnered with Detective Hillary Halstead, the cop who, while undercover, became his girlfriend. Their journey takes them from submarine lairs to sushi speakeasies, from Montauk to Manhattan, where they have to negotiate with media magnate the Gawker before a climactic rendezvous with the secretive man who supplies the Northeast with its high-cholesterol contraband, the most eternal of all breakfast foods: bacon and eggs.

Ken Wheaton was born in Opelousas, Louisiana, in 1973. Raised Catholic and Cajun, Wheaton aspired to one day be a navy pilot but was sidelined by bad eyesight and poor math skills. He graduated from Opelousas Catholic School in 1991 and went off to Southampton College-Long Island University in Southampton, New York, intending to study marine biology. An excess of drinking and (again) a dearth of math skills led him to become an English major. From there he returned to Louisiana, where he received an MA in creative writing from the University of Southwestern Louisiana (now University of Louisiana-Lafayette). Wheaton is the author of The First Annual Grand Prairie Rabbit Festival and the managing editor of the trade publication Advertising Age. A Louisiana native, he lives in Brooklyn, New York. Says Dave Barry: "I had several drinks with the author at a party, and based on that experience, I would rank this novel right up there with anything by Marcel Proust."