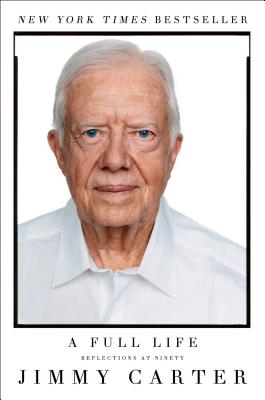 In his major New York Times bestseller, Jimmy Carter looks back from ninety years of age and “reveals private thoughts and recollections over a fascinating career as businessman, politician, evangelist, and humanitarian” (Booklist).

At ninety, Jimmy Carter reflects on his public and private life with a frankness that is disarming. He adds detail and emotion about his youth in rural Georgia that he described in his magnificent An Hour Before Daylight. He writes about racism and the isolation of the Carters. He describes the brutality of the hazing regimen at Annapolis, and how he nearly lost his life twice serving on submarines and his amazing interview with Admiral Rickover. He describes the profound influence his mother had on him, and how he admired his father even though he didn’t emulate him. He admits that he decided to quit the Navy and later enter politics without consulting his wife, Rosalynn, and how appalled he is in retrospect.

In his “warm and detailed memoir” (Los Angeles Times), Carter tells what he is proud of and what he might do differently. He discusses his regret at losing his re-election, but how he and Rosalynn pushed on and made a new life and second and third rewarding careers. He is frank about the presidents who have succeeded him, world leaders, and his passions for the causes he cares most about, particularly the condition of women and the deprived people of the developing world.

“Always warm and human…even inspirational” (Buffalo News), A Full Life is a wise and moving look back from this remarkable man. Jimmy Carter has lived one of our great American lives—from rural obscurity to world fame, universal respect, and contentment. A Full Life is an extraordinary read from a “force to be reckoned with” (Christian Science Monitor).

Jimmy Carter was the thirty-ninth President of the United States, serving from 1977 to 1981. In 1982, he and his wife founded The Carter Center, a nonprofit organization dedicated to improving the lives of people around the world. Carter was awarded the Nobel Peace Prize in 2002. He is the author of thirty books, including A Full Life: Reflections at Ninety; A Call to Action: Women, Religion, Violence, and Power; An Hour Before Daylight: Memoirs of a Rural Boyhood; and Our Endangered Values: America’s Moral Crisis.

“A warm and detailed memoir of his youth followed by a clear-eyed assessment of the issues he tackled as president and afterward . . . a sweeping overview of a broad range of issues and frequent credit to his wife Rosalynn . . . Carter puts the long arc of his story together the way he sees it. The book includes his accomplishments as a negotiator and peacemaker in the humblest way — as a man who was at work on a larger project, something he continues to be. A primer for the generations who don't know his work and a personal retelling for those who do, A Full Life may herald the reappraisal he deserves.”
— Los Angeles Times

“A Full Life is understated like the man, always warm and human, and in a few instances, even inspirational.”
— Buffalo News

“The former president is yet a force to be reckoned with. . . . The author takes the reader on an engaging personal journey through the later half of the 20th century, as he saw it.”
— Christian Science Monitor

“The drawings and poems by the author add even more of a personal touch, though crises in his marriage and his ‘estrangement’ from the Obama presidency offer the most noteworthy revelations. A memoir that reads like an epilogue to a life of accomplishment.”
— Kirkus Reviews