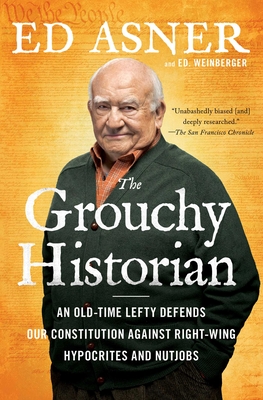 In “an unabashedly biased, deeply researched book” (SF Gate), Ed Asner—the actor who starred as Lou Grant on The Mary Tyler Moore Show—reclaims the Constitution from the right-wingers who think that they and only they know how to interpret it.

Ed Asner was a television legend, well known for his role as Lou Grant on The Mary Tyler Moore Show and subsequent spin-off Lou Grant. He won seven acting Emmy Awards, and was nominated a total of twenty times. Asner also made a name for himself as a trade unionist and a political activist. He served two terms as president of the Screen Actors Guild, from 1981-1985, during which he was an outspoken critic of former SAG President Ronald Reagan, then the US president, for his Central American policy. He died in 2021.

Ed. Weinberger began his career in the early 1960s with Dick Gregory and has written for such diverse comedians as Bob Hope, Richard Pryor, and Johnny Carson (for five years on The Tonight Show). He wrote for and produced The Mary Tyler Moore Show, co-created Taxi, Dear John, and The Cosby Show. He also executive-produced and created Amen, Sparks, and Good News. He has won three Golden Globe Awards, a Peabody, and nine Emmys. In 2000, he received The Writer’s Guild of America Lifetime Achievement Award. He lives in Los Angeles.

“If Michele Bachmann, Sarah Palin, and Teds Nugent and Cruz can call themselves Constitutional conservatives, then Asner can call them out on their so-called knowledge of America's bedrock documents. . . . Although it is, indeed, wry and witty, Asner’s 'defense' is no mere entertainer’s polemic.”
— Booklist