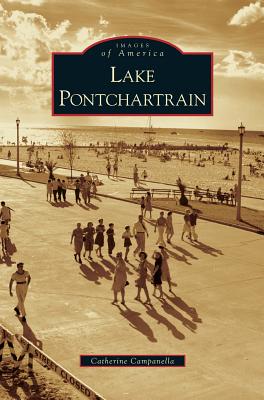 By Catherine Campanella
$31.99
Not in stock. Usually arrives in 2-5 Days
(This book cannot be returned.)

Native Americans used Okwata, meaning "wide water," as a shortcut for inland trade between the Gulf of Mexico and the Mississippi River. When the Europeans arrived, the original inhabitants showed them the route--the settlement near the river became the city of New Orleans, other lakeshore communities grew, and Lake Pontchartrain continued to be a vital waterway well into the 20th century. Aside from its economic value, Lake Pontchartrain was a cultural mecca: Mark Twain wrote about it and jazz sprang from its shores; locals and visitors traveled out to the amusement parks and opera pavilions, simple fishing villages and swanky yacht clubs, forts and lighthouses; and majestic hotels and camps perched precariously over the water. In Images of America: Lake Pontchartrain, photographs document memories of a time that not even Hurricane Katrina could erase.