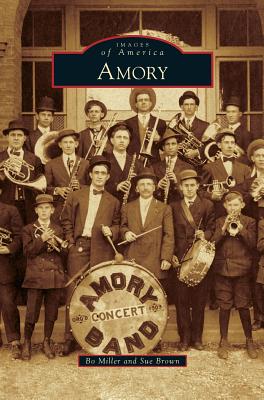 In November 1887, the Kansas City, Memphis & Birmingham Railroad (KCM&B)--later the St. Louis-San Francisco Railroad, or "Frisco"--established a new town as a halfway point on its route between Memphis and Birmingham. The town was named Amory in honor of Harcourt Amory, a prominent Bostonian and railroad executive. The 500 acres the railroad purchased from Amanda Owen were surveyed and drawn into plots parallel to the railroad tracks, creating Mississippi's first planned community. Amory prospered as men like E.D. Gilmore and Archibald Dalrymple moved to town and opened up shop. Businesses and homes from nearby Cotton Gin Port on the Tombigbee River were moved to Amory to be part of the growing town. The garment industry played a vital part in Amory's development, as the Glenn and Longenecker families established factories that made the town known as the "Pants Capital of the World." Today, the community is home to a regional medical center, top-rated schools, and a diverse mixture of retail and industrial businesses.