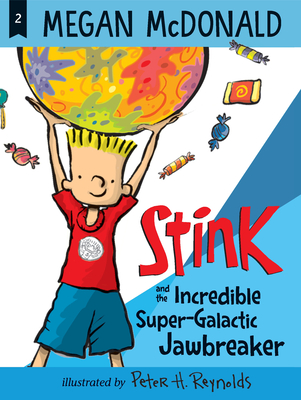 Spurred by a newfound awareness of false advertising, Stink Moody becomes the proverbial kid in a candy store as his letter-writing campaign yields him heaps of free rewards.

When Stink buys a mammoth jawbreaker that doesn't break his jaw, he writes a letter of complaint to the manufacturer — and receives a ten-pound box of 21,280 jawbreakers for his trouble! This unexpected benefit of acing the art of letter-writing in school sure gets Stink thinking. Soon Stink is so preoccupied with getting free stuff sent to him that he overlooks a scribbly envelope in the mail pile — until his best friend, Webster, starts acting standoffish and looks as mad as a hornet.

In this hilarious episode from Megan McDonald and Peter H. Reynolds, Judy Moody's shorter sibling truly comes into his own. As a delightful bonus for both teachers and kids, thirty-six common idioms — from "two heads are better than one" to "a leopard can’t change its spots" — are sprinkled throughout the story; seven of the idioms are humorously illustrated by Stink, and all are listed at the end to inspire a search for idioms that’s more fun than a barrel of monkeys.

McDonald has perfectly pegged elementary school, second-graders and the dynamics of family life. . . . These tales of the Moody family will hit the spot for beginning chapter book readers.
—Chicago Sun-Times

Like big sister Judy Moody, Stink sports a memorable name and a talent for self-expression. His predicaments and triumphs have a childlike air, and the quick-witted dialogue will keep readers entertained.
—Booklist