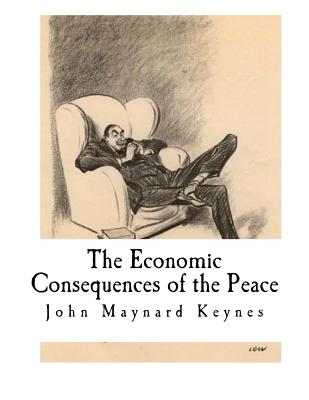 The Economic Consequences of the Peace by John Maynard Keynes... The Economic Consequences of the Peace (1919) is a book written and published by John Maynard Keynes. The book was released in late 1919 and became an immediate bestseller on both sides of the Atlantic: it was released in the US in 1920. The scathing sketches of Wilson, Lloyd George and Clemenceau proved to be very popular and the work established Keynes' reputation with the public as a leading economist. In six months, the book had sold 100,000 copies with translations into 12 languages. It restored Keynes' reputation with the Bloomsbury Group, which had been tarnished by his work for the Treasury during the war. Keynes returned to Cambridge to work as an economist, where he was regarded as the leading student of Alfred Marshall. Keynes left Cambridge University to work at the Treasury in 1915. He worked daily on financing the war effort during World War I. That disturbed many of the pacifist members of the Bloomsbury Group of which he was a member. Lytton Strachey sent him a note in 1916 asking Keynes why he was still working at the Treasury. Keynes quickly established a reputation as one of the Treasury's most able men and travelled to the Versailles Conference as an advisor to the British Government. In preparation for the conference, he argued that there should preferably be no reparations or that German reparations should be limited to.