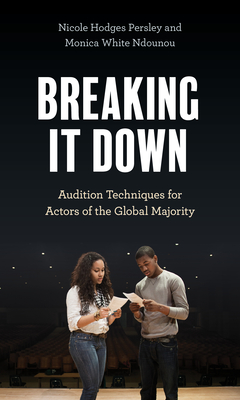 A practical guide that shows BIPOC actors how to break down the audition process rather than being broken down by the entertainment industry and its practices of exclusion and bias. Working in an environment that often stereotypes or attempts to "universalize" experiences, it's more important than ever that actors consider how culture, race, ethnicity, gender, sexuality, and ability are inseparable and important parts of their identity that should not be minimized and can instead enhance their work. In Breaking It Down: Audition Techniques for Actors of the Global Majority, Nicole Hodges Persley and Monica White Ndounou share real-world audition strategies that centers the experiences of actors of color. They combine practical advice, cultural studies, Black feminist perspectives, and lived experiences to offer intersectional approaches to auditioning. The ten steps outlined in this book aid actors across racial lines seeking to develop the necessary skills to break down a character and script while affirming their full selves into the audition to book the role. Building on the momentum of the #BlackLivesMatter, #MeToo, and Time's Up movements, Breaking It Down emboldens actors of the global majority to embrace every aspect of their identities rather than leaving themselves behind in an effort to gain entry and access to the entertainment industry.

Nicole Hodges Persley is an associate professor of American Studies and African and African American Studies at the University of Kansas. She is the a courtesy faculty member of the Department of Theatre & Dance. Hodges Persley is a member of SAG/AFTRA/AEA and Stage Directors and Choreographers Society (SDC). She has performance and directing credits in regional theater, television and film. Notable directing credits include Midnight Black, Rachel, Dutchman, Sunset Baby, and her award winning short films Epiphany and Abishai. She is the author of the forthcoming book Sampling and Remixing Blackness in Hip-hop Theater and Performance. She is the Artistic Director of KC Melting Pot Theatre, Kansas City's premier Black Theatre company. Hodges Persley the co-founder of Create Ensemble, a digital platform for creative artists of color, and the founder of Black Performance Project, a virtual multimodal maker space. Monica White Ndounou is an associate professor of theater and the 2017-2018 Sony Music Fellow at Dartmouth College. She is the founding Executive Director of The CRAFT Institute and the award-winning author of Shaping the Future of African American Film: Color-Coded Economics and the Story Behind the Numbers. Also an actor, director and member of Stage Directors and Choreographers Society (SDC), her notable directing credits include Pass Over, Gem of the Ocean, for colored girls who have considered suicide/when the rainbow is enuf and Joe Turner's Come and Gone. She is a founding member of the National Advisory Committee of The Black Seed, a national strategic plan to create impact and thrivability for Black theater institutions and initiatives. She is an alum of The Black Arts Institute and a co-founder of Create Ensemble, a digital platform for creative artists of color