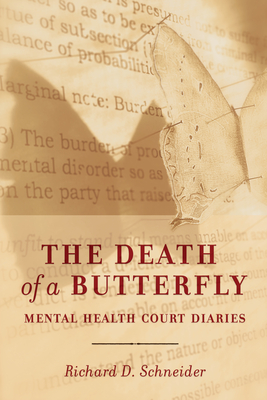 Canada has seen a dramatic increase in the numbers of mentally ill people entering the criminal justice system. In Canada and the United States, mental health courts were introduced in the late 1990s as a rehabilitative solution to traditional responses (such as incarceration) that had proven to be ineffective and detrimental to the mentally ill. Recognizing that the criminalization process was neither designed nor intended to address society's responsibility to the mentally disordered individual, these courts have sought to reverse the misplaced responsibility for the provision of mental health care services.

The Death of a Butterfly explores the mental health court and its relationship with the mentally disordered accused from the perspective of Ontario Court Justice Richard D. Schneider. How do the courts consider the protection of the public while also subscribing to the basic principles of therapeutic jurisprudence? This and other related topics are discussed fully in this collection of vignettes, alongside in-depth accounts of cases tried in the Old City Hall courthouse in Toronto. The tales of life in the mental health court--which served as a vibrant setting for the award-winning CBC series This Is Wonderland--provide a compelling analysis of fitness to stand trial, what it means to be criminally responsible, and the role of mental disorders. Schneider's honest depictions offer insight into the mentally disordered accused and the factors that place these accused in the justice system.