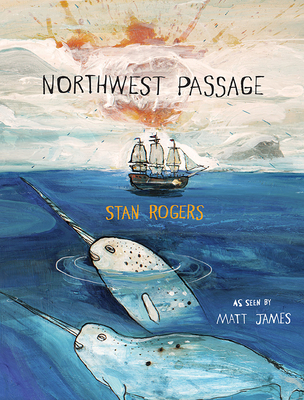 For hundreds of years explorers attempted to find the Northwest Passage -- a route through the islands of Canada's north to the Pacific Ocean and Asia. Others attempted to find a land route. Many hundreds of men perished in the attempt until finally, in 1906, Roald Amundsen completed the voyage by ship. Today, global warming has brought the interest in the passage back to a fever pitch as nations contend with each other over its control and future uses. The historic search inspired Canadian folk musician Stan Rogers to write "Northwest Passage," a song that has become a widely known favorite since its 1981 release. It describes Stan's own journey overland as he contemplates the arduous journeys of some of the explorers, including Kelsey, Mackenzie, Thompson and Franklin. The song is moving and haunting, a paean to the spirit of the explorers and adventure, and to the beauty of the vast land and icy seas. The lyrics are accompanied by the striking paintings of multiple award-winning artist Matt James. Matt brings a unique vision to the song and the history behind it, annotating his illustrations with marginalia about the explorers, including the native peoples of the north. The book also contains the music for the song, a note on the Northwest Passage, maps, information about Stan Rogers (as well as a final verse of the song that was never recorded) and notes on the illustrations. Following on the success of Canadian Railroad Trilogy, this is another beautiful book in which a memorable song illuminates a fascinating history that has taken on new resonance today.