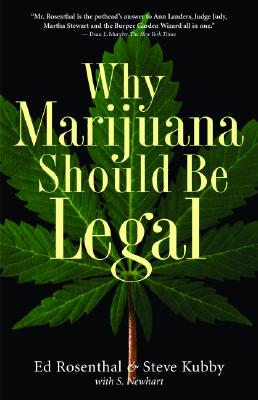 Marijuana hit mainstream America over 30 years ago and has been accepted by a large segment of society ever since. Despite government efforts to isolate and eliminate its use, it is more popular now than ever. Why Marijuana Should Be Legal analyzes the effects of marijuana and marijuana laws on society. The book addresses the drug's industrial and medical applications, preserving our Constitutional rights, economic costs, health effects, and sociological aspects. New and updated information includes how state officials are acting against the legalization of marijuana and how U.S. marijuana laws are based on inaccurate and outdated information. In discussing such issues and many more, the book presents clear, documented evidence for all of its conclusions. Also included is an annotated list of organizations that lobby for change of marijuana laws. "Rosenthal and Kubby offer crisp, well-reasoned arguments for legalizing marijuana." -- Mike Tribby, Booklist "[A]n important contribution to the current national dialog on moves toward the decriminalization of this controversial drug." -- The Midwest Book Review

Recognized throughout the world as the leading authority on marijuana, best-selling author ED ROSENTHAL has written and edited more than a dozen books about marijuana cultivation, social impact, and policy that have cumulatively sold over one million copies. His Ask Ed™ advice column has been in print for 19 years. For the last year, Ed has been the host of the "420 Report" radio show featured monthly on the Bay Area’s community radio station, KPFA 94.1 FM. He has also appeared as a guest on other radio shows and at lectures on marijuana throughout California and beyond. Throughout the last 25 years, Rosenthal has been an integral part of marijuana law reform movement, both socially and politically. A key member of the team that placed proposition 215 on the 1996 ballot in California, he continues to work locally and nationally toward a saner drug policy.

In 1998 STEVE KUBBY ran as the Libertarian California gubernatorial candidate and received over 70,000 votes. Currently, Kubby produces video online content for clients, including Pot TV, where he produces a news show, which receives 500,00 hits a month and has been featured on MTV, Fox News, CBC and Tech TV.