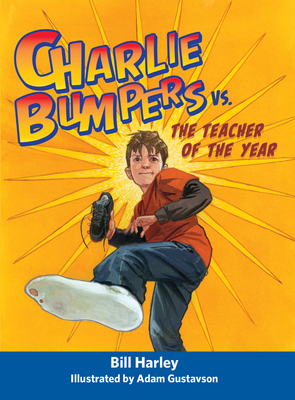 This is book number 1 in the Charlie Bumpers series.

Charlie Bumpers's worst fear is confirmed: he has Mrs. Burke for fourth grade. How will he survive the strictest teacher in school?

Shortly before school starts, Charlie Bumpers learns that he will be in Mrs. Burke's class. It doesn't matter that she's been named Teacher of the Year. He's still afraid of her. Last year when he was horsing around in the hall, he accidentally hit her in the head with his sneaker (don't ask). The exasperated teacher declared that if anything like that ever happened again, Charlie would be banned from recess forever. How will he survive a year under a teacher who is just waiting for him to make another stupid mistake?

Black and white illustrations throughout.

Bill Harley is a two-time Grammy Award–winning storyteller, musician, and author who has been writing and performing for kids and families for more than forty years. He has appeared nationally in theaters, schools, libraries, festivals and conferences, as a workshop leader and keynote and inspirational speaker. His picture books and middle-grade novels have won wide acclaim, from Bank Street School of Education Best Books, Children's Choice Awards, Green Earth Book Awards, and pick of the list from ABA.
Harley was called "the Mark Twain of contemporary children's music" by Entertainment Weekly. He lives in Massachusetts.

Adam Gustavson holds an MFA from the School of Visual Arts and a BFA from Rowan University and has taught at Seton Hall University and Philadelphia's University of the Arts. He is the award-winning illustrator of over thirty books for children. He lives, paints, teaches, and plays music in his home state of New Jersey, along with his charming family and a neurotic poodle.

"While Charlie seems incapable of avoiding mishaps, he also has some very good qualities, like helpfulness, which will have readers cheering him on. . . this is a fast-paced, enjoyable first entry in a new chapter-book series." —School Library Journal

"Harley has teamed once again with illustrator Gustavson (Lost and Found, 2012) to create a real-life world in which a likable kid must face the everyday terrors of childhood: enormous bullies, looming teachers and thick gym coaches with huge pointing fingers. Into this series opener, Harley magically weaves the simple lesson that people, even teachers, can surprise you. Readers will be waiting to see how Charlie faces his next challenge in a series that marks a lovely change of pace from the sarcasm of Wimpy Kid." —Kirkus Reviews

"The swift-paced story is powered by peppy repartee between Charlie and the people in his life, as well as his droll internal monologue. . . Dynamic and skillfully drafted ink-and-watercolor spot illustrations from Gustavson, who illustrated Harley's Lost and Found, help chronicle the hijinks." —Publishers Weekly