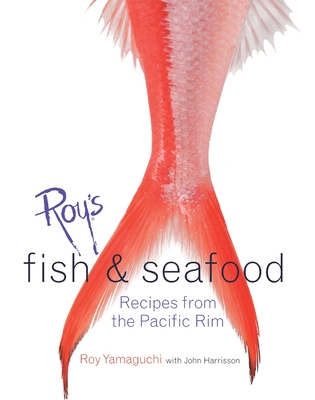 A full-color cookbook featuring 100 fish and seafood recipes as well as information about each variety of seafood from Hawaiian chef Roy Yamaguchi.

Owner of the critically acclaimed Roy’s restaurants, public television host and celebrated chef Roy Yamaguchi is considered one of today’s greatest seafood chefs and has been credited with reinventing Hawaiian cuisine. In ROY’S FISH AND SEAFOOD, Chef Yamaguchi explains the uses, flavors, cooking qualities, and specific varieties of 25 key types of seafood, including tuna, mahi-mahi, ehu, opah, sea bass, lobster, squid, and scallops as well as their potential substitutions. Chef Yamaguchi has created incredible recipes for each variety of seafood, such as Roy’s Signature Blackened Ahi with Soy-Mustard Sauce, Crab and Potato-Crusted Ono with Creamed Spinach and Bacon, Pan-Seared Butterfish with Coconut Sauce and Kalua Pork Miso, and Spicy Tempura Shrimp with Mango-Avocado Salad. This collection of delicious recipes and indispensable preparation information will inform and inspire any lover of seafood.

After growing up in Japan, ROY YAMAGUCHI moved to New York to train at the Culinary Institute of America. In 1988, he left the mainland to open the first Roy's, in Honolulu. In 1993, he was named Best Chef in the Pacific Northwest by the James Beard Foundation, and he now operates 33 Roy's restaurants worldwide.
JOHN HARRISSON has co-authored cookbooks with many of America’s leading chefs, including Mark Miller, Roy Yamaguchi, and Hubert Keller. He lives in Hawaii.

“Yamaguchi has helped pioneer a cuisine that combines Hawaiian ingredients and traditional dishes with French, Italian, and Japanese techniques and flavors.”—Bon Appétit“Using salsas, spices, and even pancetta, Yamaguchi puts a multicultural spin on the familiar while honoring Hawaiian flavors.”—People magazine“Roy Yamaguchi could rightly be called the father of modern East-West cooking.”—Gourmet