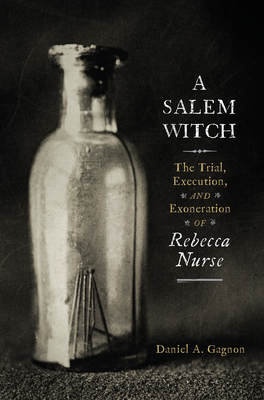 In the winter of 1692 something terrible and frightening began in Salem Village. It started with several villagers having strange fits, screaming, and unnaturally contorting themselves, and ended with almost two hundred people in jail, and at least twenty-five dead. Witchcraft accusations—claims that some inhabitants had forsaken God to become servants of the Devil—spread from Salem Village across Massachusetts, ensnaring innocent people from all strata of society under a burden of assumed guilt. One of the most significant accusations, and most unlikely, was against a seventy-one-year-old grandmother, Rebecca Nurse.
The accusations against Nurse, a well-respected member in the community, seemed unbelievable. Unflinchingly, this ailing elderly woman insisted on her innocence and refused to falsely confess. Supported by many in Salem, Nurse’s family and neighbors challenged her accusers in court and prepared a thorough defense for her, yet nothing could surmount the fear of witchcraft, and she was sentenced to death. Nurse, seen as a martyr for the truth, later became the first person accused of witchcraft to be memorialized in North America.
In A Salem Witch: The Trial, Execution, and Exoneration of Rebecca Nurse, the first full account of Nurse’s life, Daniel A. Gagnon vividly recreates seventeenth-century Salem, and in the process challenges previous interpretations of Nurse’s life and the 1692 witch hunt in general. Through primary source research, he reveals how the Nurse family’s role in several disputes prior to the witch hunt was different than previously thought, as well as how Nurse’s case helps answer the important question of whether the accusations of witchcraft were caused by mental illness or malicious intent. A Salem Witch reveals a remarkable woman whose legacy has transformed how the witch hunt has been remembered and memorialized.

DANIEL A. GAGNON serves on the board of directors of the Rebecca Nurse Homestead Museum in Danvers, Massachusetts (formerly known as Salem Village). A high school history teacher on the North Shore, he received a BA in history from Providence College and an MA in history from Boston College.

“Daniel Gagnon’s biography of Rebecca Nurse places her life and continuing legacy as well as her death in thorough historical context. In the process, Gagnon unravels some previous assumptions and suggests new lines of inquiry. The bibliography and notes are valuable resources in themselves.”—Marilynne K. Roach, author of Six Women of Salem and The Salem Witch Trials

“Dan Gagnon has written a highly readable and first scholarly biography of Rebecca Nurse, perhaps the most famous of the Massachusetts Salem witchcraft victims of 1692. Meticulously researched, Gagnon traces the history and biography of Nurse and her family through their New World settlement; the dramatic events of her accusation, trial, and final execution; and the later remembrances of her and her legacy in today’s world. In telling the powerful story of Rebecca, Gagnon makes the complex history of the Salem witch trials more easily understood, while at the same time giving us a very good read.”—Richard B. Trask, author of The Devil Hath Been Raised

“A well-written look at the judicial misconduct that took place in 1692 and the perfect storm of events that facilitated this awful period in our history. But most of all, it is the story of the Nurse family and its undying love for its matriarch, who they not only stood by in the worst hours of her life, but even after death, getting both her conviction and excommunication overturned and creating a legacy that has outlasted them all.”—Berkshire Eagle