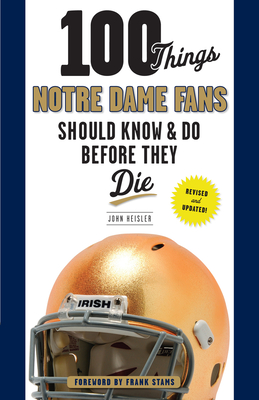 The storied Notre Dame football program has long been full of pride and passionate fans, as the Fighting Irish have provided decades of incredible memories for its legion of alumni and followers, and author John Heisler captures this tradition and others in this essential fanbook. Created for the serious football fan who wants to enhance their Fighting Irish IQ, this book reveals special stories and experiences from fans and memorable moments about past and present players and coaches. As a longtime ND employee in the sports information and athletic departments, author John Heisler shares what’s really important and he touches on some of the most famous games, players, and traditions in Fighting Irish history, including Knute Rockne’s “Win One for the Gipper” speech, the team’s game day walk from the Basilica to Notre Dame Stadium, Joe Montana’s legendary comeback performance in the 1979 Cotton Bowl, Indiana State Police Sergeant Tim McCarthy’s public safety messages, and the team’s storybook and inspirational 2012 season. From singing the Notre Dame Fight Song at the Friday night pep rally at the Joyce Center to taking in a game at historic Notre Dame Stadium, this guidebook covers all there is to Irish football, making a must read for any fan.

John Heisler is in his 35th year as a member of the University of Notre Dame athletics staff. He was named to his current post of senior associate athletics director for media and broadcast relations in 2004 after spending 16 years as sports information director. He has written or edited eight other books on Notre Dame football, including collaborating with Lou Holtz on the New York Times bestseller The Fighting Spirit. He’s a member of the College Sports Information Directors of America Hall of Fame. He lives in Granger, Indiana. Bryant Young was a defensive tackle who started for three seasons with the Notre Dame Fighting Irish. He played for the San Francisco 49ers for 14 seasons and was elected to the Pro Bowl four times. He is currently the defensive line coach at the University of Florida. He lives in Gainesville, Florida. Frank Stams was a member of Notre Dame’s 1988 national championship team. He played for three NFL teams during his professional career. He was born in Akron, Ohio.