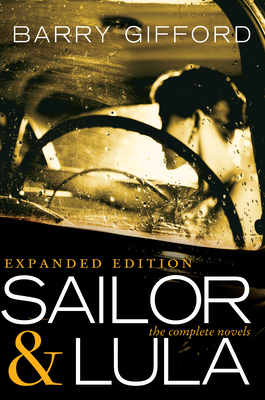 "The Romeo and Juliet of the South" are back in this new edition of the internationally best-selling Sailor and Lula novels, now including for the first time the culminating novel, The Up-Down, by American master Barry Gifford.

Here for the first time in print together are all eight of the books that comprise the saga of Sailor Ripley and Lula Pace Fortune, "the Romeo and Juliet of the South": Wild at Heart, Perdita Durango, Sailor's Holiday, Sultans of Africa, Consuelo's Kiss, Bad Day for the Leopard Man, The Imagination of the Heart, and The Up-Down.

The author of more than forty works of fiction, nonfiction, and poetry, which have been translated into over twenty-five languages, BARRY GIFFORD writes distinctly American stories for readers around the globe. From screenplays and librettos to his acclaimed Sailor and Lula novels, Gifford’s writing is as distinctive as it is difficult to classify. Born in the Seneca Hotel on Chicago’s Near North Side, he relocated in his adolescence to New Orleans. The move proved significant: throughout his career, Gifford’s fiction—part-noir, part-picaresque, always entertaining—is born of the clash between what he has referred to as his “Northern Side” and “Southern Side.” Gifford has been recipient of awards from PEN, the National Endowment for the Arts, The American Library Association, the Writers Guild of America and the Christopher Isherwood Foundation. His novel Wild at Heart was adapted into the 1990 Palme d’Or-winning film of the same name. Gifford lives in the San Francisco Bay Area.

"Sailor and Lula are two characters that inspire, thrill and light the imagination of the young the world over." —David Lynch

"His stories about the couple, along with the friends, foes, and acquaintances who orbit them, are set in a noirish, Beat-infused, and yet somehow contemporary America that is threaded with equal parts grit and grace. The cultural references, both low and high, sprinkled throughout the pages of Sailor & Lula make up a master syllabus as regards What Is Cool ..." —Los Angeles Review of Books